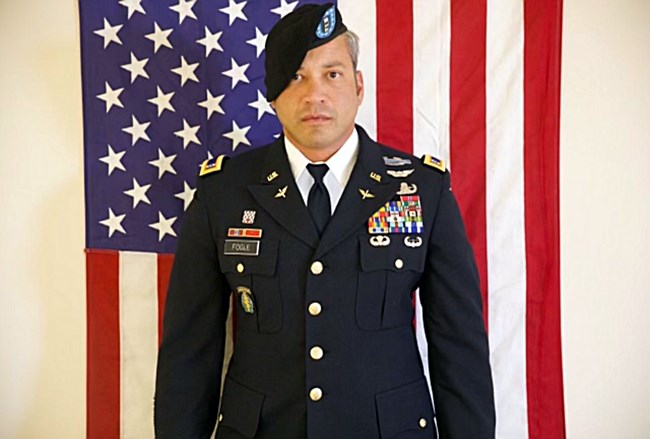 Nicholas Manuel Fogle, 38, of Fort Bliss, Texas passed away on Wednesday, July 6, 2022. Nick was born into a military family on October 18, 1983 in Frankfurt, Germany. Nick was a U.S. Army Chief Warrant Officer (CW2) with an illustrious and heroic career. His work ethic and sacrifice reflected his love for the United States, its citizens, and his family. Nick had six combat deployments during 18 years of honorable military service as an Infantryman, an EOD bomb technician, and an Apache helicopter pilot. During his career he was awarded several honors, including the Bronze Star, the Army Commendation Medal with Valor Device, and Air Medal with Combat Device. On several occasions, he was credited with saving many lives over separate deployments. Nick was devoted to his family. He was a loving husband and father, leaving behind his devoted wife, Tricia Fogle of 16 years, daughter Jaime, age 12, son Nicholas age 9, and daughter Dakota, age 3. He is also survived by his loving parents and their families; Charles J. Fogle (and Toni); Milagro Reigel (and Howard); sisters, Heather Fogle, Monica (Fogle) Jahed, and Catherine (Reigel) Barnett; and brothers Brandon Tell and Joel Reigel; as well as several aunts, uncles, nieces, nephews and cousins. Nick would light up a room with his sparkling brown eyes and mischievous teasing, he was the life of the party with his jokes and banter. His smile was infectious. He reliably provided solace and wisdom to his colleagues and friends at work, especially in the deployed environment. He was an inspiration in his work life and personal life. Nick will be greatly missed and never forgotten. The family appreciates the overwhelming support and expressions of sympathy from all. The family offers profound thanks to Nick’s coworkers and friends for their loyal friendship to Nick throughout his years of military service, as well as, their boundless assistance to his family during this time of need. A visitation for Nicholas will be held Friday, July 22, 2022 from 3:00 PM to 7:00 PM at Murphy Funeral Homes, 4510 Wilson Boulevard, Arlington, VA 22203. A funeral service will occur Saturday, July 23, 2022 from 12:00 PM to 1:00 PM, 4510 Wilson Boulevard, Arlington, VA 22203. A reception will occur Saturday, July 23, 2022 from 1:00 PM to 3:00 PM, 4510 Wilson Boulevard, Arlington, VA 22203. Nick will be buried with full military honors at Arlington National Cemetery at a later date. The family would like any donations to be given to Tunnels to Towers (T2T.org) in lieu of flowers in Nick’s memory. Online condolences can be offered at https://www.dignitymemorial.com/obituaries/10842495. Murphy Funeral Home is honored to serve the family and friends of Nicholas Manuel Fogle.
VER MÁS VER MENOS