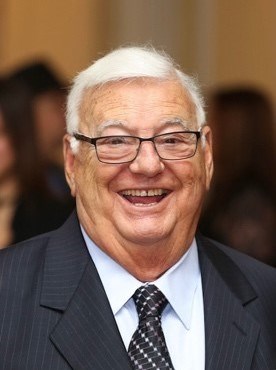 Paul Conrad Nassetta, a long time Washington, DC real estate developer, died peacefully at the age of 92 on September 19, 2022. Paul was born and raised in New London, CT and attended St. John’s Prep in Danvers, Mass before moving to Washington, DC to attend Georgetown University. Upon graduation, Paul joined the FBI and subsequently served as a Lieutenant in the U.S. Army stationed at Fort Benning, GA. Paul was honorably discharged and returned to the DC area to attend Georgetown School of Law. While in Law School, Paul worked as a Military Science Instructor at Western High School. Paul joined Frank S. Phillips in 1960 and was co-founder and President of Phillips Development Company. Paul greatly enjoyed a deep lifelong friendship with business partners Leland Phillips and Jimmy Earnest. In 1954, Paul married the love of his life, Catherine Ann O’Brien also from New London, CT. Together, they built an extraordinary life in Arlington, VA where they raised six children and where they enjoyed all aspects of being Grampa and Kay Kay to their adoring grandchildren. Paul held many successful roles in his life including as President of the Arlington Chamber of Commerce and head of the planning commission during the pivotal planning of the Metro System, but his favorite role of all was that of Grampa. A man of deep faith, Paul had the gift of knowing how to enjoy life to the fullest and to make the world a better place to all who were around him. He was a joyful giver the extent to which we will never completely know. Paul’s parents, Conrad and Rosemary, immigrated from Italy. Paul cherished his heritage and enjoyed many wonderful family trips to Italy. He also loved spending time on the Chesapeake Bay and in Montana. In addition to his loving wife Kay, Paul is survived by children Nancy, Paul (Colleen), Bill (Trisha), Chris (Paige), Lynne (David), Mary Kay (Ware), 17 grandchildren and 4 great grandchildren. A celebration of life will be held at St. Agnes Catholic Church on Friday, October 14th at 2:00PM. A reception will follow from 3:00 PM to 6:00 PM at the home of Chris and Paige Nassetta (5028 30th Street North, Arlington, VA). In lieu of flowers, please consider donating to the VHC Health Foundation.
VER MÁS VER MENOS