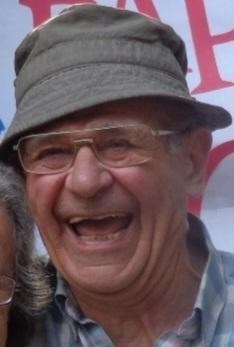 Joseph Herman Fogg Joseph Fogg passed away peacefully on July 31st at Togus VA Medical Center in Augusta. Joe was born at home in South Freeport on July 16th to Merrill and Clara Fogg. He was the 7th child and 4th son born to the Foggs. He attended Freeport schools, and joined the Navy where he served on the destroyer USS Bausell. He was in the navy from 1953 through 1957. After being honorably discharged, Joe began his career as a stitching room mechanic at Sebago Moc. He learned the trade under the tutelage of his Uncle Joe Soule. His training led him to Bruce Shoe in Biddeford, and eventually to Supreme Slipper in Lewiston until the factory closed. Joe was well known for his ability to repair anything. Everyone who knew him knew that if they needed anything mechanical fixed, he was the one to see. His mother called him “Joe, Joe, make it go”. Joe married Ruth MacDonald in 1960. They met on a blind date in May and were married in September that same year. This September would have marked 62 years of marriage. Joe and Ruth had 4 children - 3 girls and a boy. They became the proud grandparents to 15 grandchildren and 14 great grandchildren, with 2 more on the way. He is predeceased by his parents and sisters, Charlotte and Emily, and brothers, Edwin (Bub), Donny, Mo and Ernie and their spouses. He is survived by his wife Ruth (MacDonald) Fogg, and their children Marcia and her husband Dave Nelson of Oxford, Lynn and her husband Rusty Googins of North Yarmouth, Jill and her husband Kevin O’Connor of Winslow, and Jason and his wife Lindy Chisholm of Buck eld. Grandchildren Seth (Jenn) Fogg, Ashley Lachance, Kate Obie, Lydia Obie, Curt (Caitlin) Wetzel, James Wetzel, Lucy Wetzel, Virginia Googins, Rose Googins, Zachary O’Connor, Audrey (Tyler) Cain, Adam (Alyssa) O’Connor, Ben O’Connor, Abby Fogg and Paige Fogg. 14 great grandchildren with 2 more coming soon. Sister Marilyn and sister-in-law Janice, as well as cherished nieces and nephews. There will not be visiting hours. The memorial service is on August 12th at 2:00 pm at the East Monmouth United Methodist Church located at 573 Route 135 Monmouth Maine 04259. Per family request, the burial will be private.
VER MÁS VER MENOS