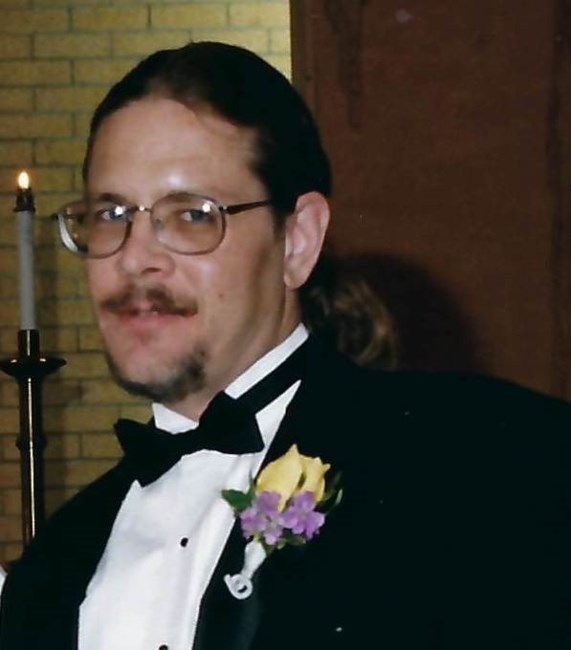 George Wayne Worrell, the beloved husband of Suzanne Edmiston Worrell, unexpectedly passed away at his home on July 29, 2022. He is survived by his wife, Suzanne, his sister Patricia, and her husband Tom Phelps of Mason, Michigan, his niece Kellye McCulloch and daughter Emmaleigh Morgan, his uncle, Hyram French, and aunt, Carol French, of San Diego, California, his uncle, Clayton Smith and aunt, Anne Smith of Colorado, and His loving mother, Rosalie “Ermine” Smith, his father, G.L. Worrell, and his stepfather, W.O. Smith, predeceased him. George was born January 7, 1964, in San Antonio, Texas to parents Ermine and G.L.. He attended McCallum High School in Austin and went on to Austin Community College to earn a Certificate in Motorcycle Repair in 2004, a lifelong interest of his. George married his wife Suzanne on May 20, 2000, at St. John’s Methodist Church in Austin. George held many jobs throughout his life, working as a screen printer, a security guard, a yard worker, and peer specialist at Austin Travis County Integral Care (ATCIC). He was particularly passionate about serving his clients at ATCIC, helping mentally disabled Austinites with transportation, groceries, doctor visits, and medication pickup. In Austin, George was a rebel as an avid Texas A&M fan, as his uncle Hyram and father, Lee Worrell were graduates of A&M, in a sea of Longhorns. He loved country music, particularly Dwight Yoakum, and classic rock. He shared his love for Christian rock with his wife, Suzanne, which they especially enjoyed listening to together when they were engaged. George loved animals, adopting dogs and cats throughout his life. George was a devoted Christian all his life. He was particularly active in his church, St. Matthew’s Episcopal of Austin, which he joined with his wife in 2002. He served as an usher, on the Altar Guild, and as a member of the Brotherhood of St. Andrews. He greatly loved his church family and found significant comfort in their presence and love. The memorial service is scheduled for Saturday, August 20, 2022, 11am, at St. Matthew’s Episcopal Church, 8134 Mesa Drive, Austin, Tx 78759. George’s family requests that in lieu of flowers a donation be sent to the National Alliance on Mental Illness (NAMI): https://nami.org/Home
VER MÁS VER MENOS