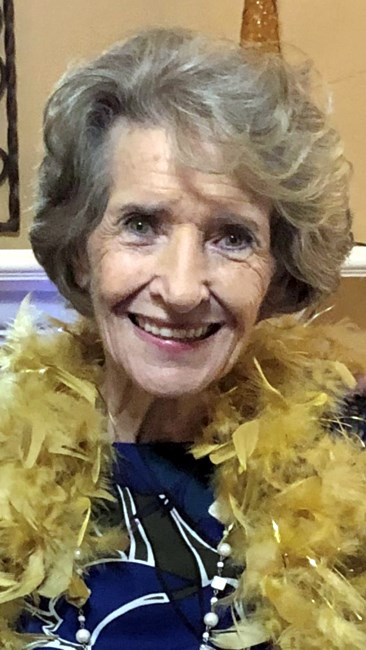 Nadine Gilbert, age 83 passed away on Friday, September 16, 2022. Nadine was born September 7, 1939. September 16, 2022, Mina Nadine Sellers Gilbert fell asleep in her home with her sweet puppy, Gracie, by her side, and woke up in Heaven face to face with her savior, Jesus. There to greet her were her parents, Lonnie Sellers and Wilma Nelle Sellers, her infant sister Carole Joyce Sellers and stepsister, Elizabeth Ashworth. Nadine was born in Baytown, Texas, September 7, 1939, and grew up in Highlands, Texas, surrounded by a large extended family. She was beautiful, feisty, and fiercely independent. The oldest of seven children in her household, she held her own with her three brothers, and paved the way for her three sisters. After graduating from Robert E Lee High School, she married and had three daughters. Nadine put her whole heart into whatever role she had at the time: daughter, sister, aunt, wife and especially mother. She served as room mother, girl scout leader, and PTA president (her fall carnival at our elementary school was legendary!) Her many careers included waitressing, sales (excelling as a woman car salesman in the '70's), office manager, sous chef, mobile home park owner, and a highlight for her, merchant marine--or as she liked to say, "when I ran away to sea." In retirement, she threw herself into the role of grandmother and later, great-grandmother. She babysat, watched them play sports, planned adventurous sleepovers, and held tea parties. She loved keeping up with their lives and could use social media and her Iphone to do just that. Nadine was an avid reader, a writer and a life-long learner (she once borrowed graduate-level theology books to read and study!) She was known for writing and telling jokes and even did a bit of stand-up comedy. She was quick to laugh and kept those around her laughing, too. It's not hard to imagine Jesus laughing with her in heaven. She leaves behind daughters Laurinda Turner and husband Keith, Deena Logan and husband Kevin, and Tricia Deese and husband Grage, and their father Harley Leazer; grandchildren Aimee Swindall, Andrea Turner, Aubrey McCullick, Alyssa Moore, Zach Turner, Christopher Logan, Cassi Logan, John Beaver, Jr., Christopher Deese, Jeremy Beaver, Tiffany Beaver; sisters Nelda Hadaway, Wilma Cooper, Connie Dabney, Helen Vacek, and Mary Knoerr; brothers John Sellers, C.W. Sellers, Milton Sellers and Kenneth Bass; 19 great-grandchildren, and a multitude of nieces and nephews, and cousins. Fond memories and expressions of sympathy for the Gilbert family may be shared at www.earthmanbaytown.com
VER MÁS VER MENOS