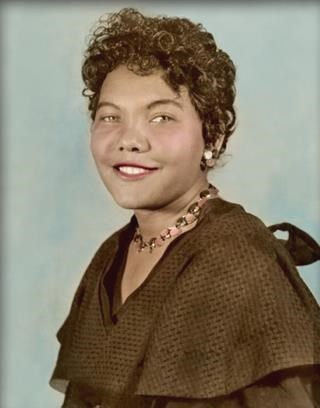 Barbara Thomas aged 79, died peacefully on October 3rd, 2017 at St Joseph's hospital in Burbank, California. Barbara was born December 5th, 1937 in Pioneer, Louisiana. She was the oldest daughter of Willie M. Jackson and Julia (Grimes) Jackson both of Pioneer, Louisiana. Barbara enjoyed shopping for and collecting antiques some of which she kept on display. Others, such as vintage books and toys she would gift to her great grandchildren. She also enjoyed cooking and could often be found clipping recipes, watching cooking shows and collecting recipe books and magazines. A devoted mother, grandmother, great grandmother and friend she loved spending time with her family and would often have long, laughter – filled conversations over the phone with loved ones living out of state and abroad. In 1957 Barbara graduated high school in Pioneer, Louisiana. In 1958, Barbara had her first child, Linda, and in 1960 she married Oliver Thomas Jr., an aircraft engineer in the United States Air Force. Shortly after the two were married, Oliver's enlistment brought them to Lincoln, Nebraska where they had their son Gary in 1961. At the end of his enlistment in 1964, the family moved to Los Angeles, California where Barbara raised the two children and managed the household. Barbara is survived by her siblings Clyde Jackson, Tellas Jackson, Kenneth Jackson, Billy Jackson, Janice (Jackson) Porchia and Katherine Jackson. Her children Linda Joyice Jackson and Gary Xavier Thomas, her grandchildren Deree Lynee (Vance) Jackson and her husband Marcus K. Jackson their children Miya Lynn Jackson, Madisyn Emma – Sha’ron Jackson, and Mars Quentyn Jackson. Her grandson Derek Reginald Vance and his daughter Jordyn Lynee Vance. Her granddaughter Candace (Thomas) Lee and her husband Larry Lee Jr and their children Aryon Clavon, Emani Lee, Elijah Lee and Larry Lee III. She also leaves behind numerous loving relatives and friends. She is preceded by two sisters and one brother, her mother Julia and father Willie, her granddaughter Erin Renee Thomas, her husband Oliver and her great granddaughter, Maree Angelique Jackson. Barbara will have a private funeral in Burbank, California and a second private funeral and burial in Pioneer, Louisiana where she will be laid to rest along side her parents. The family would like to thank all of those who cared for her during her illness. Arrangements under the direction of Valley Funeral Home, Burbank, CA.
VER MÁS VER MENOS