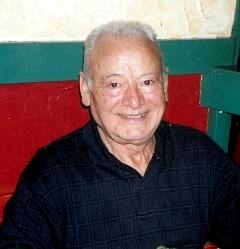 Born in Vallelonga, Calabria, Italy. Survived by his wife of 65 years, Gina, children Rose, Rachael (Norm) and Tony, granddaughters Talia (Pedro) and Deaven, his sister Mary (Salvatore), and many nieces, nephews, cousins and friends. Predeceased by his father, Antonio (1971) and his mother, Rosa (2006).

Dad was 16 years old when he immigrated to Vancouver with his mother January 1, 1949, finally reuniting with his father after a 15 year separation due to the war and travelling restrictions. As a family they settled in East Vancouver and Dad attended Strathcona Elementary School. He completed 6 years of school (kindergarten to grade 5) in 6 months and after learning the English language decided it was time to get a job. His first job was as a shoe shine boy, downtown Vancouver on Granville Street. Dad moved onto his next job at Hotel Vancouver as a dishwasher, where Max Rippstein took him under his wing and trained Dad as a meat cutter. Dad’s next job was as a trained meat cutter and manager with Serve-U-Supply for over 46 years.

Dad married Gina by proxy in 1956 and had three children and settled in East Vancouver for 28 years. Their first house purchase came with a car! Their next move was to Burnaby where he lived for the next 37 years.

Dad’s favorite past times were attending to his vegetable garden, barbequing, making wine with his brothers-in-law, spending time with family and friends, playing card games with his granddaughters, hosting Sunday family dinners, and taking many road trips to the Oregon coast beaches and Palm Springs. Dad will always be remembered as a humble, compassionate, generous and hospitable man.

SPECIAL THANKS: The family wishes to thank Pastor Walter Patterson of Willingdon Church for being the officiant at the graveside service.