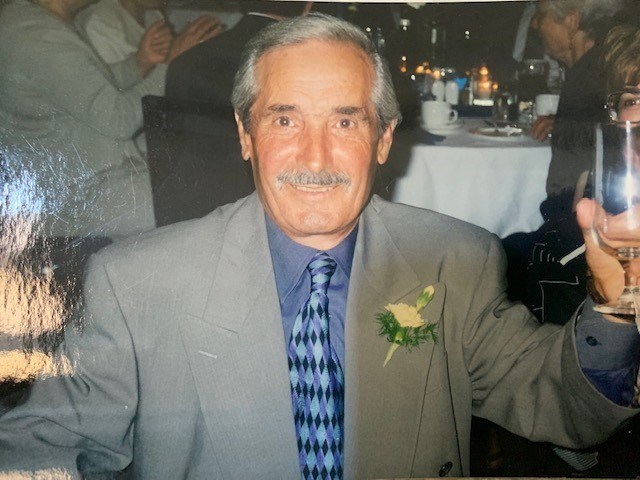 With heavy hearts, we announce the death of Pasquale (Paul) Canino, who passed away on July 26, 2022 at the age of 82. Beloved husband of Carmela for 55 years. Cherished and devoted father to Ida (Peter). Proud and loving Nonno to Nicolas and Mikaela. Dear brother of Ann Lucente (Peter). Will always be remembered by his brothers in law Paul and Frank Di Benedetto, Sister-in-law Meta Di Benedetto (Peter, RIP) Nieces and Nephews Carmela, Frank, Lisa, PJ (Nancy) Carla (Damian) Oran (Amy). Pasquale is reunited in heaven with his parents and sister Maria Stancati, (Giuseppe, RIP). Paul was born In Carpanzano, Cosenza, Italy, August 8, 1939, he studied to be a mechanic, and brought that skill with him when his family emigrated to Prince George, Canada in 1959. After many stints at various jobs, he found his niche with the City of Prince George as a Cement Finisher, until retirement in 2004. Paul spent a great amount of time working tirelessly with the Italian community of Prince George, coaching soccer, organizing festivities for the Italian Centre, and so much more! He had a passion for cars, which showed with his continuous tinkering of the older models, as his 1989 Cadillac Coupe de Ville... Paul and Carmela moved to Burnaby in 2008 to be closer to daughter Ida, and in 2009 as grandparents to the twins, Nicolas and Mikaela. Paul's greatest joy was spending time with his grandchildren, taking them to school and picking them up, and then treat time at Tim's or Starbucks. Although Paul left many, many friends and relatives in Prince George, he was very quickly surrounded by new friends within the Burnaby Italian Community and the Brentwood Garden complex. He will be held dear in the hearts of his family, extended relatives, and many loving friends here in Burnaby, Prince George, Toronto, Windsor, Italy and Ireland, whose lives he touched. Rest in Eternal Peace, Paul, you are truly loved.... With emotional gratitude, the family acknowledges the many, many gestures of kindness and compassion shown us during this difficult time. In lieu of flowers, a kind donation to any Hospice Society would be welcomed... A funeral mass for Pasquale will be held Friday, August 19, 2022 at 11:00 AM at Holy Cross Parish, 1450 Delta ave., Burnaby, BC V5B 3G2. Fond memories and expressions of sympathy may be shared at www.bellburnaby.com for the CANINO family.
VER MÁS VER MENOS