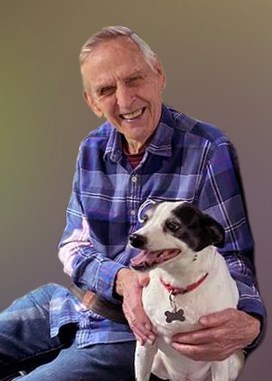 Richard Eugene Jackson, of Grand Rapids, MI and Pomona Park, FL, was born October 14, 1932 and passed away peacefully October 1, 2022. He was preceded in death by his father, Dallas Jackson; mother, Dorothy (Longcore) Jackson; brother, Jerry Jackson; and grandson, Jared Jackson (Randy’s son); many other aunts, uncles, grandparents, and friends. He is survived by his sister, Betty VerBurg of Byron Center, MI. He remained close and involved with his ex-wife and mother of his children, Angela Jackson. He is also survived by children Deborah Klooster of Belmont, MI, Susan (Mike) Rubin of St. Augustine, FL, Randy (Donna) Jackson of Sevierville, TN, Diana (Kevin) Sorensen of Grand Rapids, MI, Karen (Dan) Andrus of Ada, MI; Deborah's children Jason Klooster, Brian Klooster, and Jayna (Alex) Anderson; Susan's children Nathaniel Bingman, Brandon (Gina) Bingman, and Anthony (Karen) Perotti; Randy's children Holly Davis, Ryan Jackson, Tyler Jackson, and Dawson Russell; Diana's child Victor Jackson; Karen's children Erika Nowicki, Jackson Goudzward, Isabelle Andrus, and Mason Andrus; great-grandchildren Melaney (Tim) Smith, Peyton Klooster, Jaydon Klooster, and Shanna (Eric) Henrickson, Spencer, Warren, Kenlynn, and Michelle Anderson, Riley and Brooklyn Bingman, Carsten Davis, Emilee and Evan Nowicki; great-great-grandchildren Kellan and Dawson Smith, Levi Klooster; special nephew, Terry (Judy) Jackson of Pomona Park, FL (Judy was like a daughter to him); many more extended family and friends. Richard had a very fulfilling life. He loved being busy and hard work. He started his tool and die apprenticeship during his senior year of high school. The United States Army drafted him, but allowed him to finish his apprenticeship before sending him overseas to be stationed in Germany, where his oldest daughter, Debbie, was born. While serving, he was a tank mechanic and clerical worker. When they returned to the states, he worked in the Tool and Die trade for 20 years working at Link, Jarecki, and finally AutoDie. When the tool and die shops would be slow, he built 60 houses on the north end of Grand Rapids. He then purchased Soft Water Lake in 1970. He renovated the pavilion, built huge rafts and a new high dive, poured hundreds of feet of concrete terraces, and brought in new beach sand. He and his family ran the resort for 11 years. Since it was a family-run business, the kids were able to have some of their close friends work there too. It provided amazing memories for many families in the Grand Rapids area to this day, but especially to him and his family. After that, he decided to buy a brand new Ford 9000 semi-truck, and did national deliveries, so he could see the United States. He loved driving and exploring new states while still earning a living. When his father passed away in 1982, he inherited his home in Pomona Park, Fl. He went down to check it out and ended up staying and starting a whole new Florida chapter to his life. He built several houses, put in culverts, started a rent-to-own shed business, and many other odd jobs for the next 34 years, all on his own terms. He loved going to amusement parks, traveling, and walking by the ocean with his dogs. He loved Gatlinburg, Tennessee which was the halfway meeting place between Michigan and Florida for family get-togethers. Randy and Donna ended up moving there permanently 15 years ago. One of his other favorite places was Silver Lake. He loved the sand dunes, boating, and fishing. Dementia/Alzheimer’s decided to take over this brilliant, hardworking man, and he ended up back in Michigan with his youngest daughter, Karen, and her family. With her two youngest children still at home, Mr. Dan (as Pops liked to call him), and his little furry buddy, Lyle, he enjoyed the last five years with all of them. He would go to SarahCare and Side by Side during the day, which are two wonderful adult daycare centers, where he made many friends, and new loved ones, especially Aly Vela, Nurse Mary, and David DeLeon. His youngest grandson, Mason, was extremely involved in his grandfather’s care and has now started working at SarahCare. His life touched and inspired so many. He always said he never understood why he was so blessed, but we were the ones who are blessed to have known him. Richard chose to be cremated, but headstones and ashes will be placed in both Grand Rapids, MI and Pomona Park, FL. Cremation will be handled by Cook Funeral and Cremation Services of Byron Center, MI. The family welcomes memories and messages in their online guest book at www.cookcaresbyron.com. A celebration of life will be held from 6-8:30 p.m. Thursday, October 6, 2022, at the Beckwith Place Apartment’s clubhouse located at 1359 Dewberry Pl. NE, Grand Rapids, MI 49505. Ecclesiastes 3:1-4 (ESV): "For everything there is a season, and a time for every matter under heaven: a time to be born, and a time to die; a time to plant, and a time to pluck up what is planted; a time to kill, and a time to heal; a time to break down, and a time to build up; a time to weep, and a time to laugh; a time to mourn, and a time to dance."
VER MÁS VER MENOS