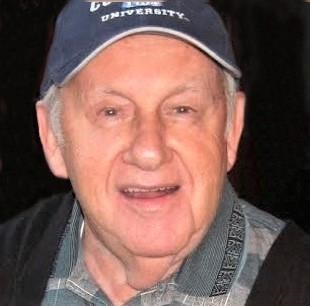 Aron Greenfield was born in Dukla, Poland on July 17th, 1926, to Baruch Avraham and Rosa (Kanner) Grunfeld. At the age of three, his family moved to the town of Szczakowa, where he lived until the beginning of the war. There were nine siblings: Moshe, David, Yosel, Sala, Aron, Beresh (Bernard), Lilek (Saul), Devora, and Rivka. Aron studied at both the local public school as well as a cheder (Jewish religious school). In 1939, when the Nazis invaded Poland, their town became more of a ghetto and in 1942, at the age of 15, any remaining family members were separated and Aron was sent to the first of nine concentration camps. Miraculously, Aron survived, and reunited with his only surviving sibling, Sala (Sarah Greenspan). He has often attributed his survival to remaining flexible. Aron, Sala, and her husband and young daughter traveled to the United States in 1949, eventually settling in the Boston area, where Aron worked as a “peddler,” or door-to-door salesman. In 1971, Aron married Martha (Nowak), and bought Brenner’s Children’s Shop in Norwood, which they have owned and run for 49 years. Because of who they are and how they interact so personally with customers, the store became their second home and has been a mainstay of the town. Hundreds of children in and around Norwood were “dressed by” Aron and Martha—whether it was bat mitzvah dresses, Easter suits, or Scout uniforms. Aron made it his mission to teach about the Holocaust and share his powerful stories. He has spoken to thousands of adults and students across the area over many years and always hoped that they would be inspired to continue telling his story and teaching others. Aron was a lover of dancing, good music, dark chocolate, cake, coffee, listening to the news, talking politics, and washing dishes. He was funny, young at heart, and full of energy. Aron was an incredibly devoted husband, father (and father-in-law), and grandfather. There was nothing he wouldn’t do for his family. His wife Martha was his rock and their only daughter, Nadine—along with her husband Andrew Binstock and their three children, Eliav (15), Hadas (13), and Sheyn (8) -- were his absolute pride and joy. Aron died unexpectedly, but peacefully, at his daughter’s home in Maryland on September 26, 2022, the first day of Rosh Hashanah, 5783. Donations in Aron’s memory may be made to Jewish Family & Children’s Services of Boston’s Holocaust Services fund (www.jfcsboston.org), or to the American Association of Jewish Holocaust Survivors of Greater Boston. A chapel service for Aron will be held Friday, September 30th at 8:00 AM at Stanetsky Memorial Chapels, 475 Washington Street, Canton, MA. For the safety of all who attend, please wear a mask Burial will follow at Mishkan Tefila Memorial Park, 2605 Centre Street, W. Roxbury, MA. The Chapel Services will be livestreamed at https://tinyurl.com/AronGreenfieldService and may be watched as a recording at that link thereafter.
VER MÁS VER MENOS