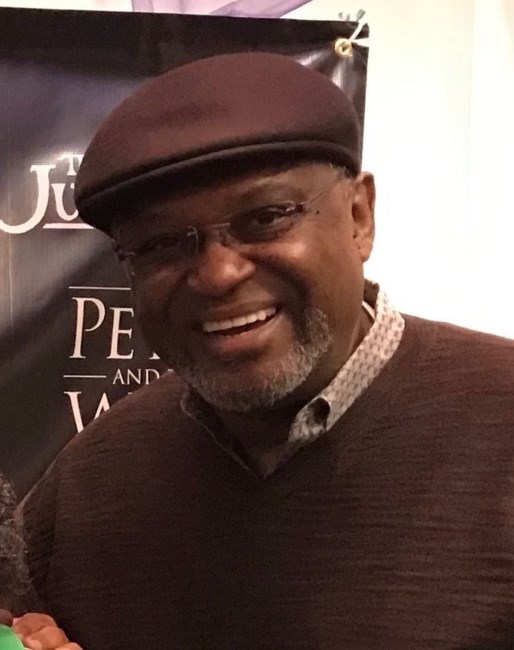 A Life Celebrated, A Life Honored, A Life Well-Lived On July 13, 1953, heaven deposited and delivered a bouncing baby boy to the union of Vergie and Gordon Pierce, Sr., aptly named, James Richard Pierce. He was a happy, buoyant, sweet child, infinitely curious and interested in new experiences. Raised in a family of tremendous foundational faith, James was free to excel and explore, exhibiting an aptitude and early passion for sports. “...Can anything good come out of Compton?…” The family moved from South Los Angeles to Compton, CA, where he was strongly encouraged and supported to develop his intellectual and especially, his athletic skills at Laurel St., Enterprise, and later, Compton High School. One of his most memorable early accolades was as a sophomore and member of Compton High’s Varsity Basketball team when they had capped an unforgettable 62-game winning season as CIF champions -- the first-ever, along with his brother, Franklin, a senior at that time. The seeds of his gamesmanship, team player, and leadership skills were planted during this formative period. Did he have an idea that they would also blossom into a successful business career? Another mystery to unfold, he met the future love of his life, Beverly Smith, in those what seemed to be, halcyon days at Compton High. “...A dream deferred, reunited and it feels so good; a whole new world…” James attended San Jose State University while Beverly matriculated at Iowa State University after graduating from Compton High School. Those seeds began to blossom for him in the Bay Area as he would begin the ascent of a more than 35-year history in the cable industry from his early days at Times Mirror Cable before retiring as a VP@ Time Warner Cable. During his burgeoning career, he excelled at leading his teams to deliver cable networks design of the future. He also pioneered mapping solutions for the industry and transformed how engineers use maps in design systems. A well-respected cable veteran with an impactful career! More importantly, he developed life-long friendships and relationships with former work colleagues and bosses alike. With this group, came an understanding of the true meaning of extended family and the village. James had an easy-going attitude that made you feel comfortable, even special, and always had time for everyone. Little did he or Beverly know that despite going on their separate ways after high school, time would somehow later reunite them, build a family of two sons, Cory and James, Jr, and begin the journeys of a lifetime, both professional and personal. Over the span of those years were such joys as a flyfishing Alaskan cruise, experiencing the cultures of Europe, Asia, particularly, the sacredness of mosques in Istanbul and the gastronomy and cuisine of the Bahamas, the Mediterranean, North Africa, and across the United States. James took extreme pride in his family and extended family, especially cherishing the affirming fellowship with his beloved and distant cousins, aunts, uncles at family reunions. He believed in making life comfortable for him and his family. His love for all things technological was as vast as his passion for sports. He was intellectual; loved to read, with a quick-witted, grounded sense of humor. And yet he had his mother’s heart, his father’s sense of responsibility, pragmatic and patient. He had a generous, giving heart and spirit and no one was a stranger to him. Thursday, January 13, 2022, marked the blessed transformation of his life Preceding James was his father, Gordon, Sr., mother, Vergie, and brother, Franklin, where they rest together before the great and final reunion. He leaves to cherish and share his memory and legacy, his loving and devoted wife, Beverly, his two sons, Cory (Jamila) and James, Jr.; granddaughters, Sanaa and Kiah; two brothers, Mark Duane (Louise and Charles Gordon, a host of aunts, uncles, nieces, nephews, great-nieces, great-nephews, other relatives as well as many cherished friends.
VER MÁS VER MENOS