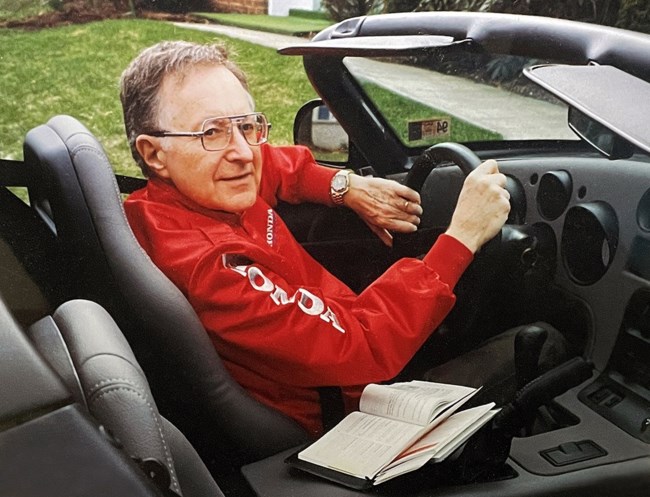 Arthur B. Becker (1928 – 2022) Arthur Bernard Becker of West Bloomfield, Michigan, died July 31, 2022 at the age of 94. Born in Norwich, Connecticut, he was the son of Frank and Rose Becker and the brother of Harold and Nathan Becker. After service in the US Navy towards the end of World War II, Art studied law at Boston University and became an attorney. He married Gloria Oxman and had two sons, Bill and Ross. Arthur’s career as an executive in the insurance industry took the family from Connecticut to the Chicago area and later to Philadelphia. His many professional accomplishments included the writing of the first Long Term Care policy in the insurance industry. Art and Gloria were married for 65 years, until Gloria’s death from Alzheimer’s disease in 2016. Art supported Gloria’s work as a contemporary artist and her later studies at the University of Pennsylvania, where she received her Bachelor’s, Master’s and Ph. D. degrees. Although he was a button-down General Counsel for major insurance companies, Art’s friends knew he had a great sense of humor and also a personal taste for adventure: he rode Honda motorcycles for many years, often taking long solo trips into rural Lancaster County, Pennsylvania, where Amish buggies could provide sudden road blocks to navigate around. Gloria worried about his safety on these rides and finally prevailed on Art to give up his motorcycle days. So he bought a Porsche 911 Targa. Before retiring from his last job as an executive at an insurance company in the Harrisburg area, he purchased another sports car, a Dodge Viper. Retirement brought Art and Gloria first to Beaufort, South Carolina, and then to Charlotte, where they spent what Art described as the happiest years of their lives. Unfortunately, this period was interrupted by the tragic deaths of their youngest son, Ross, and his wife, Judith, in a 2001 highway accident near Charleston South Carolina, at a time when the Becker family was planning to gather in Charlotte. A few years later, Gloria’s illness led her and Art to leave Charlotte for the Detroit area, where they could be near their son Bill and his wife, Fran. Throughout the course of Gloria’s illness, Art visited her every day, no matter what the weather. Often, he would trudge through winter sidewalks and parking lots covered with snow and ice in order to be with her. Arthur enjoyed outings with Bill and Fran to visit his favorite restaurants and to catch up on the news from his grandchildren Andrew and Caroline. He was excited to visit Andrew and Andrew’s wife Amy, who were living and working in San Juan, Puerto Rico, when Art was 90 years old. And he was very proud of Caroline, who is a laboratory scientist at the Harvard Stem Cell Institute. Art was looking forward to becoming a great-grandfather in November, when Andrew and Amy (now living in San Francisco) are expecting a baby. Sadly, a fall, a broken hip, and then a stroke led to his passing before that time. When the family visited Art at his bedside in hospice care, Caroline reminded Art that he would soon be a great-grandfather. Although he was barely able to speak, Art responded, saying slowly but distinctly, “I’m already a GREAT … grandfather!” And, of course, he was.
VER MÁS VER MENOS