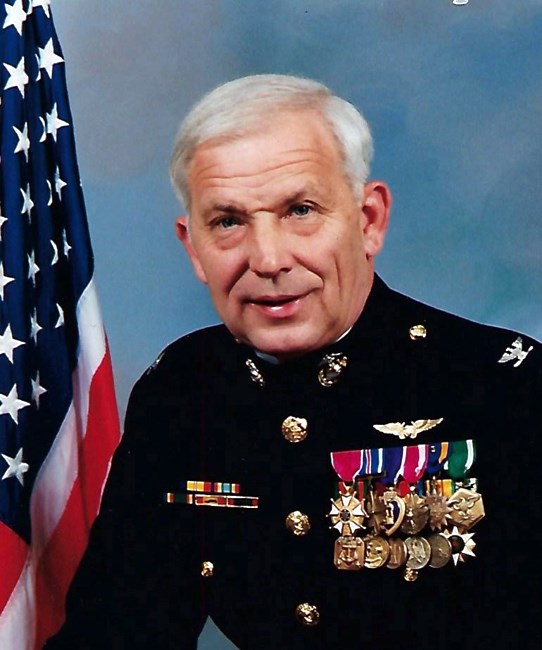 John enlisted in the Marine Corps from Detroit and rose through the ranks to retire from his beloved Corps as a colonel. John was Naval Flight Officer. He logged 550 combat missions as a Radar Intercept Officer in the F-4 Phantom. He served during the Vietnam War and was a highly decorated Marine combat veteran. John received many honors including the Legion of Merit, the Distinguished Flying Cross, a Purple Heart, Meritorious Service Medal, Air Medal with Strike Flights 39, the Navy Commendation Medal, the Navy Achievement Medal with Combat “V” (and star in lieu of second award), the Combat Action Ribbon, the Navy Unit Commendation, the Good Conduct Medal, the National Defense Service Medal, the Armed Forces Expeditionary Medal, the Vietnam Service Medal with three Stars, the Sea Service Deployment Ribbon, the Republic of Vietnam Gallantry Cross with Palm Unit Citation, the Republic of Vietnam Actions Unit Citation, and the Republic of Vietnam Campaign Medal.

John made history when he became the very first Naval Flight Officer in the Marine Corps to command a Marine Corps fighter jet squadron. He ended his active duty career as the Commanding Officer of Marine Wing Support Group-47 at Selfridge Air National Guard Base. He also served as the Head of Leadership Studies and the Director of the Navy JROTC Program at Murray-Wright High School in Detroit, not too far from where he grew up. After retirement, John enjoyed being with his wonderful bride, Rachel, and his loving family. He enjoyed golfing, fishing, and watching his favorite Detroit sports teams – both when they were champions or dismal.

Fond memories and expressions of sympathy may be shared at www.resurrectionfuneralhome.com for the Church family.