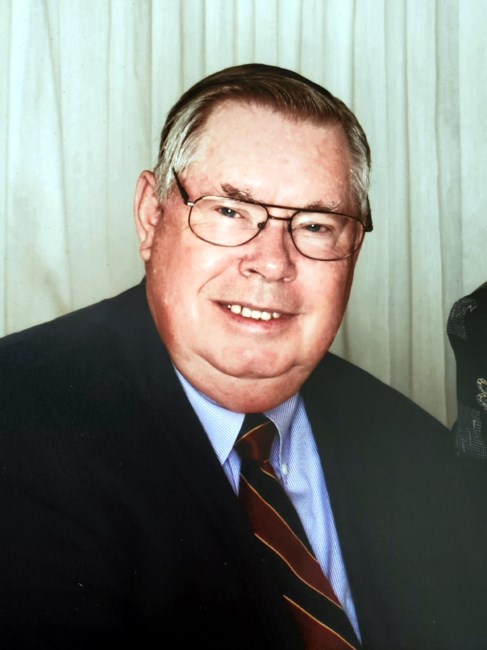 Earl R. Wilson of Columbia, Missouri died at the University Hospital on January 17, following hospitalization for the Covid-19 virus. He was born on December 19, 1939 at his grandparents' home in Butler County, Missouri. Earl joined the Navy in 1957. He met the love of his life, his wife, Flo, while he was stationed in Newfoundland, Canada, and they enjoyed 60 years of marriage together. He served four years in the Navy and another sixteen years in the Airforce, including a yearlong deployment during the Vietnam War. He earned a Bronze Star for his work on radio equipment for the 307th Strategic Wing. Flo and Earl had two daughters, and the family moved around frequently and spent many months apart during his military career. While in the Airforce, Earl earned his bachelor’s degree and an MBA. After Earl retired from the military, the family made a final move to Columbia, where he began working on his Masters and PhD, both in accounting at the University of Missouri. He held a teaching position at the University first as a graduate teaching assistant, then as graduate instructor, transitioning to an assistant professor and then associate professor, and he became a permanent faculty member in 1993. He became the Director of the School of Accountancy in 1996, earning Distinguished Director between 2000 and 2002 and earning Professor Emeritus in 2003. Throughout his academic career, Earl made a big impact on his students and colleagues and co-authored several textbooks. He was well known for his corny jokes, which always got a laugh from his students, children and grandchildren. Earl loved teaching and never missed an opportunity to help his grandchildren learn something new. He was loved dearly by his children, grandchildren and great grandchildren, who adored his silly antics. Earl is survived by his daughters, Pamela Wilson and Kimberly (husband, John) Hiley, Columbia, MO; grandchildren, Heather (husband, Matt) Gazda, Suffolk, VA, and Brandon Pepper, Roswell, NM; great-grandchildren, Zake and Byron Pepper, Richlands, NC, and Connor and Sophia Gazda, Suffolk, Va; sisters, Tracy (husband, Richard) Gant and Dorothy (husband, Gary) Crites; and two nephews, Chris Halcomb and Randy (wife, Debbie) DesGranges. He was preceded in death by his wife, Flo Wilson; his parents, John and Lola Mae Wilson; his brother, Jimmy Wilson, and one granddaughter, Hilary Wilson. A memorial service will be held at a later date when it is safer to gather. In lieu of flowers, gifts will be appreciated to the Earl R. Wilson Doctoral Scholarship in Accountancy at the University of Missouri-Columbia. Checks should be mailed to Mizzou Advancement, 407 Reynolds Alumni Center, Columbia, MO 65211, indicating Earl’s scholarship fund. Alternatively, contributions to a local food bank in Earl’s memory will be appreciated.
VER MÁS VER MENOS