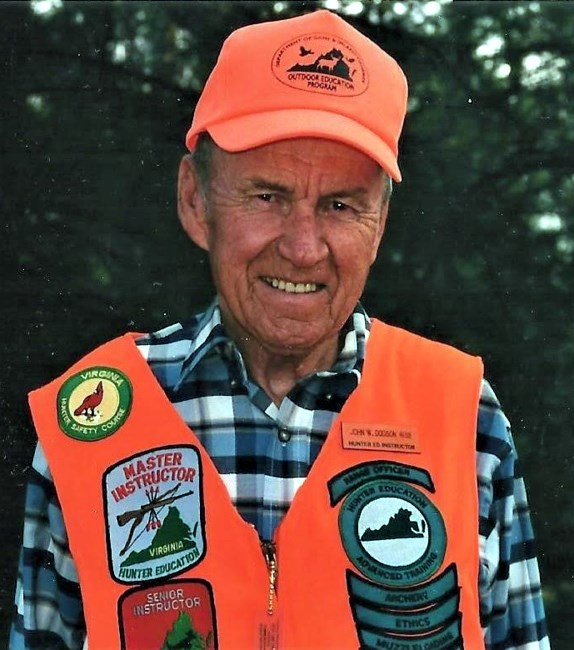 John Willis Dodson, 86 of Madison, Virginia passed away peacefully while surrounded by family on Friday, July 28, 2017. He was born in Culpeper on May 15, 1931 to Richard Hezekiah and Rhoda Frances Jenkins Dodson; served his country for a decade in the U.S. Air Force; was a civil servant for the federal government; and owned and operated both Little John’s Market and the A-1 Country Store. He also volunteered his time selflessly as a Hunter Education Instructor for 28 years, often with his loving wife by his side. He received many awards including the Morgan Award for Hunter Education, the International Hunter Education Hall of Fame Award and the Virginia Hunter Education Lifetime Achievement Award. John was the founder of Cedar Mountain Youths with a mission of teaching young people firearm safety and responsibility. He was an avid outdoorsman who enjoyed hunting, fishing and mentoring others. John believed that our first loyalty was to God, then to his country, then to his family, and only then to himself. Mr. Dodson was beloved as a husband, father, grandfather and uncle. He is survived by his wife of 64 years, Lucy Ruth Woods Dodson of Madison; his children, David L. Dodson and wife Laurie of Rhoadesville, Cheryl D. Goldsborough and husband Lee of Brightwood; his grandchildren, Rebecca Dodson, Rachel Dodson and husband Eddie Norlander, Renae Helwig and husband Aaron, Evan Goldsborough and fiancé Jacqueline Allen, Amelia Goldsborough; and his siblings Mary Huntt, Alice Reed and husband Ben, Gertrude Fant, and James Dodson. He is preceded in death by his parents, his sister Elizabeth Marshall, his brother Richard Lewis Dodson and an infant son, Richard David Dodson. Funeral services will be held in the chapel of Clore-English Funeral Home, Friday August 4, 2017 at 1:00 p.m. with internment in Culpeper National Cemetery, Chandler Street, Culpeper, VA with military honors provided by the V.F.W. Post 2524 Honor Guard. The family will receive friends Thursday, August 3, 2017 from 6:00 p.m. until 8:00 p.m. at Clore-English Funeral Home, 11190 James Monroe Highway, Culpeper, VA. In lieu of flowers, memorial contributions should be made to the Hospice of the Piedmont or the Culpeper Christian Fellowship Benevolence Fund. Online condolences may be offered through clore-english.com. Arrangements have been entrusted to the Clore-English Funeral Home.
VER MÁS VER MENOS