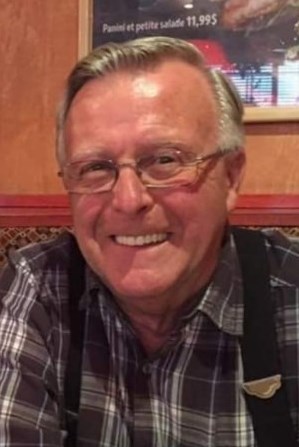 It is with heavy hearts that the daughters of Paul Doucet announce his passing at the Villa Renaissance in Dalhousie on August 29th, 2021 at the age of 77. Born in the Dalhousie on July 27th, 1944, he was the son of the late Leo Doucet and the late Marguerite (Maltais). In January 1970 Paul married the love of his life Juanita Ault, they spent many happy years at their home in Charlo, until her passing in 2009. Paul worked his entire life at the Mill in Dalhousie until his retirement. Some of his happiest times were spent sitting around a backyard fire with his children and grandchildren, telling stories and having a good laugh. One of his most favorite things was playing video games with his grandchildren, (Papa was a gamer), where there was always an unlimited supply of fudgesicles, which no one was allowed to tell Nanny about. Paul was predeceased by his sister Blanche, his brother Jack and his sister-in-law Jacqueline. He leaves behind his daughter's Tammy (John Felix), Amber (Louis Hachey) and Paula ( Louis Jerome). Also his brothers Reno (Yvette), Robert (Anne) and sister Irene ( Frank Russell), as well as his brother-in-law Robert Ault Jr. (Bernice). He will be dearly missed by his grandchildren, Kat ( Abner Collette), Danielle, Megan, Matthew and Ryan. All of us will forever miss his smile, his funny little (Pillsbury doughboy) laugh and his famous spaghetti sauce. The day you left and gained your wings our hearts just broke in two. we wished you could have stayed with us but Mom was calling you. You left us with great memories and we dearly love you still, no matter how much time goes by please know we always will. Until we meet again Dad enjoy your alone time with mom. Love forever and always Tammy, Amber and Paula. Funeral arrangements were in the care of Maher's Funeral Home, Dalhousie. (506)789-1699 or toll free (855) 404-1699 email: maher.fh@nb.aibn.com
VER MÁS VER MENOS