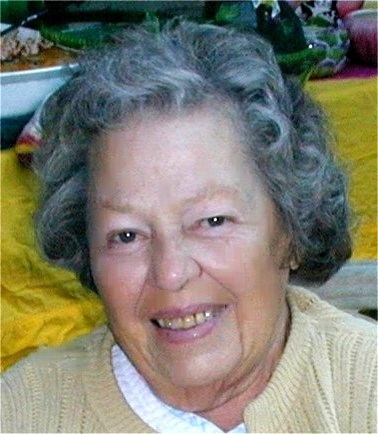 Beulah H. (Rux) Olsen (97) passed away May 15, 2013. She was born September 24, 1915 in Rocklyn, to homesteaders, Charles L. and Julia H. (Bursch) Rux. She joined big sisters Mabel (13), Aileen (9) and Bessie (8). Beulah and her sisters rode horseback to the one room red schoolhouse several miles from home. When it was time for her older sisters to attend high school in Harrington, it was too far to make the trip every day so the sisters boarded at the Methodist Church. Beulah joined them to attend 5th & 6th grades in Harrington. Bessie earned a teaching degree and came back to teach at the little red schoolhouse. Miss Rux was Beulah’s teacher for a year. In 1928 the family moved into Davenport. Beulah graduated from Davenport High School in 1933 along with a dashing young man named Bud. Christmas Day 1934 the Rux family was gathered for dinner. At the end of the meal, Charles said he had a surprise announcement to make. “There’s going to be a wedding here today!” The pastor arrived and the groom’s family came to witness the marriage of Beulah Henrietta Rux to Marvin Ole (Bud) Olsen. The couple lived with Beulah’s folks and Bess & Claude Rutter under one roof while Bud opened up a small mechanics shop in Davenport. His mechanical skills were in demand so they soon moved to Spokane where he worked for Consolidated Freight. It wasn’t long before the wheat fields beckoned them back to Davenport. Beulah was a busy homemaker and mother when Barbara and Bonnie came along. Bud took over farming the Olsen family farm and daughters, Melanie & Brenna, joined the family. Beulah was a faithful member of the Davenport Gospel Tabernacle (Harvest Celebration Church) which her father had been a founding father. She enjoyed Sewing Club, gardening and quilting with her sisters. She always had the sweetest disposition - quiet, steadfast and strong in her faith. Beulah is survived by her daughter, Melanie (Lee) Sperry of Woodinville, grandchildren Randall & Bryan (Julie) Chrisman, Corynne (Joel) DeJong and Selena (Marty) Johnson, five great grandchildren and numerous nieces & nephews. She was preceded in death by husband, Bud Olsen and daughters, Barbara (Gordon) Chrisman, Bonnie (Len) Schlottmann and Brenna Olsen. Graveside service will be held on Friday, May 24 at 1:00pm at Mountain View Cemetery, Davenport, WA. A celebration of life memorial is being planned for later this summer. Please sign our online guestbook at www.stratefuneralhome.com. STRATE FUNERAL HOME, DAVENPORT, WA is caring for the family.
VER MÁS VER MENOS