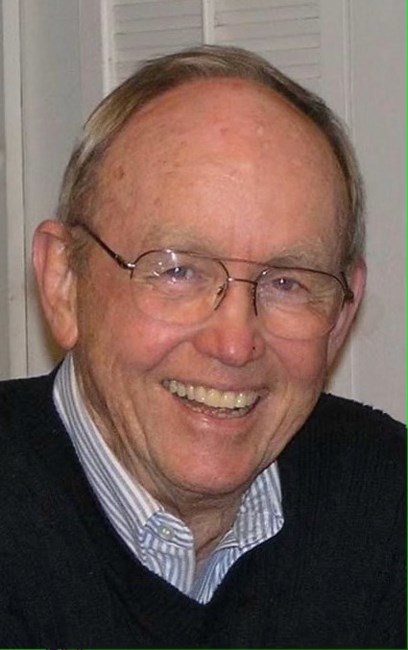 KUNTZ, Peter Henry, a lifelong and widely admired Daytonian, passed away peacefully at Hospice of Dayton on January 18, 2022. “Pete” was born on May 8, 1928 to Martin and Isabel (McGrath) Kuntz. He is preceded in death by his loving wife of 70 years, Marjorie Jean (Caporal) Kuntz; his sisters Marianna and Isabel and his brother Martin Jr. Pete is survived by his brother-in-law Robert Caporal (Marge); his six children—Paula Killian (Robert), Jane Kuntz (Richard Powers), Molly Fraker (Harrison), Peter Kuntz (Lori Kleinerman), Ellen Quinttus (Richard); Marjorie “Midge” Wegener (Mark); twelve grandchildren and four great grandchildren. Pete and Marge met in high school, he attending Chaminade and she Julienne. They both completed their undergraduate degrees at University of Dayton and were married in 1950. Pete was employed in various capacities at PK Lumber Company, the Dayton-based family business founded by his grandfather Peter H. Kuntz. The company was sold to Michigan-based Erb Lumber Company in 1986, and Pete retired in 1989. Pete and Marge began their life together in Springfield, Ohio after which they moved to Dayton View for five years before building their family home in Kettering in 1960. They lived there until 2016, when they moved to One Lincoln Park in Kettering. Devout Catholics, Pete and Marge were members of St. Albert the Great Church. Pete worked on the “Seeds of Growth” campaign to raise funds for urban schools in Dayton. Pete served on several boards during his career, including Mercy Siena Woods Nursing Home, Miami Valley Catholic Education Council, Ohio Lumbermen’s Association, The Good Samaritan Hospital and Health Center, and Human Race Theater Company. He was a member of the Dayton Rotary Club and served on two charitable foundation boards—the Kuntz Foundation (President) and the Louise Kramer Foundation. He received the Brotherhood Award from the National Conference. An active and grateful alumnus, Pete served on the University of Dayton Board of Trustees, including a distinguished term as President. He subsequently chaired a highly successful capital campaign for the University. In related service, he was a trustee of the Ohio Foundation of Independent Colleges. Pete received alumni awards from University of Dayton and Chaminade and was named an honorary Doctor of Humane Letters by University of Dayton. As a member of Moraine Country Club for many years, Pete enjoyed his second great love—the game of golf. Pete and Marge together enjoyed attending live theater productions and demonstrated their own acting chops as members of the Hamlet Theater Group. The family would like to thank the caregivers at Hospice of Dayton. Friends may call from 11:00 a.m. to 12:00 p.m. Friday, March 25, 2022 at St. Albert the Great Catholic Church, 3033 Far Hills Ave., Kettering, Ohio 45429, with a Mass of Christian Burial at 12:00 p.m. In lieu of flowers contributions may be made to St. Albert the Great Church, The Christ Child Society of Dayton, Chaminade-Julienne High School or a charity of your choice. Condolences may be sent to www.tobiasfuneralhome.com
VER MÁS VER MENOS