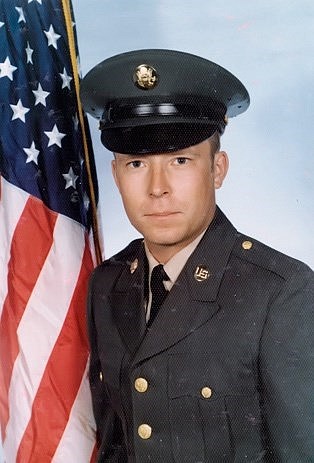 Glenrock, Wyoming- A Mass of Christian Burial for Mark Lee Robberson, 62, will be held at 3:00 PM, Wednesday, June 13, 2018, at St. Louis Catholic Church, 601 S. 5th Street, Glenrock, Wyoming. Interment will be in the Glenrock Cemetery. Mark died peacefully Monday, March 30, 2018, in his apartment at the MorningStar at Dayton Place, a senior living community in southeast Denver, Colorado. He really enjoyed this community and made and loved many friends who loved him. He was born September 2, 1955, in Grand Junction, Colorado. When Mark was three years old the family moved to Jeffrey City, Wyoming; where he grew up and attended school until the eighth grade. He spent a few summer vacations with his grandparents in Grand Junction, Colorado; helping them with their beautiful rose and abundant fruit and vegetable gardens; returning home with sacks full of fresh fruits, vegetables, and several unique birdhouses constructed by him and his grandfather. Mark and older brother Trent served as altar boys at Saint Brendens Catholic Church, in Jeffrey City, for a few years; including the First Communion mass for younger brother Jay and sister Sandra. Like most children growing up in Jeffrey City, the outdoors was his playground, lifetime friendships were made, and the childhood memories magical. He enjoyed hunting with his father and brothers, and fishing in the local streams and lakes with both family and friends. Mark and most of the community’s children looked forward to a yearly summer four-wheel drive camping trip to Christina Lake (located above Lewis Lake); and hike into the upper Atlantic Lakes, to catch trout for an annual Lions Club fish fry. On a separate backpacking trip to the Milky Lakes, with Jenner Mariner and boys Jim, Jerry and Mike; a large cast iron skillet was found at their campsite and Jenner had mentioned he would like to have it, but it was too heavy to pack out. Mark packed the skillet out for him. Jenner spoke highly of Mark for this, for years after. His freshman year in high school he joined his older brother and sister in attending the Lander Valley High School, Lander, Wyoming (High School students from Jeffrey City were bussed to Lander on Sunday afternoons and bussed back to Jeffrey City on Friday afternoons to be with their families for the weekend). In March 1972, the family moved to Glenrock, Wyoming, where he completed the last few months of his junior year in high school. Marks friend Billy Wagner would occasionally drive from Jeffrey City to Glenrock on weekends to visit and would bring as many other friends of the family that he could fit in his car. Mark graduated from Glenrock Junior – Senior High School in 1973; two years later joined the United States Army serving as a radio operator in Germany, and then retiring with an honorable discharge. After his discharge he traveled some, and one of his favorite places was New Orleans during “Mardi Gras”. He lived in Rapid City, South Dakota for a few years, then purchased a small home and lived in Glenrock, Wyoming, for several years. He moved to Colorado, eventually purchasing a home in Canon City, and then settled at the above-mentioned retirement community in Denver, Colorado. Mark enjoyed the finest of cigars and pipe tobaccos and had an exceptional collection of pipes and paraphernalia. He was skilled at and enjoyed leather work; crafting wallets, belts, and other leather handcrafted projects, while at the same time enjoying smoking one of his freshly packed pipes. He also collected household antiques and automobiles. Survivors include brothers Trent (Connie), Jay, and Walt Robberson; sisters, Colleen (Dave) Bolte, Sandra (Brian) Beckstead; 6 nephews and 4 nieces. Mark was preceded in death by his parents Frank Jr. and Portia. In lieu of flowers, memorials can be sent to NAMI via the website at: https://ifundraise.nami.org/index.cfm?fuseaction=donate.event&eventID=503&referrer=WEBGIDD, or to donate by mail: NAMI P.O. Box 62596 Baltimore, MD 21264-2596
VER MÁS VER MENOS