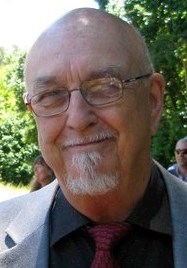 Frank Alan Williams, 88, born in Grand Rapids, Michigan, and longtime resident of East Lansing, died on May 23, 2022. Retired from Okemos Public Schools where he taught language arts at Kinawa Middle School, announced Okemos High School football games, and directed musicals at both Kinawa and OHS, Frank was an avid MSU sports fan, a great chef who freely shared his recipes, and an enthusiast of Harry Potter and all the magic. Surviving are his wife of 48 years, Bethany; his children, Eric, Jeffrey, Katie, and Stephanie; his grandchildren, Cabal and George; his brothers, John and Paul; several nieces and nephews; and his dog, Charley. He was preceded in death by his parents, Edna and Howard; his brothers, Tom and Jim; and his dog, Romeo. Frank’s wry wit and joyous zeal will live on in those who loved him. The family would like to extend their thanks to the care workers at The Willows of East Lansing and Careline Hospice. Fond memories and expressions of sympathy may be shared at www.greastlansing.com for the Williams family.
VER MÁS VER MENOS