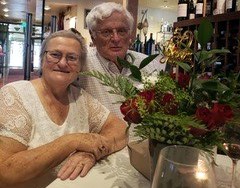 Joyce Arletta Dinkel Beseke February 10, 1949 - July 26 2022 Joyce A. Beseke passed away at her home in El Cajon California on July 26th 2022. She passed peacefully with her husband of 50 years by her side. Joyce was born in Hay Springs Nebraska on February 10th 1949. Her parents were Arden “Mike” Dinkel and Jeannette Huntington Dinkel of Hay Springs. When Joyce was a young girl her family moved to Oral South Dakota to a new farm on the Angostora project. A few years later her family moved to Hot Springs South Dakota where she later graduated from Hot Springs High School in 1967. From high school Joyce went to Augustana University in Sioux Falls South Dakota. She graduated in 1971 with bachelors of history degree. After graduation, Joyce started a teaching job in Sheridan Wyoming. In June of 1972, she went to Virginia Beach Virginia to visit her soon to be husband, Roger who was in the Navy. Having been engaged since February of the same year, they decided to get married. On July 14th 1972 Joyce and Roger were united in marriage. Less than a month later, her mother passed away and Roger was transferred to Hawaii. Since he was going on a cruise right after arriving, Joyce stayed to teach another year in Sheridan. The following April Joyce resigned from the Sheridan school system to join her husband in Hawaii. They spent 18 months on Hawaii before moving to Virginia Beach. In 1976 Joyce and her husband moved to the Washington D.C. area. While in Washington, Joyce took on various job descriptions working for Blue Cross Blue Shield, In 1998, Joyce and Roger moved to San Diego California where she lived until her passing. Joyce was a seamstress, craft person, and avid gardener. Joyce's most prized accomplishment was to make baby quilts for all of her great nieces and nephews of which there are many. Joyce and her husband loved to travel and were in all 50 states, Bermuda, and Hong Kong. In 2019, Joyce discovered she had cancer. For three and a half years she fought a valiant fight never to complain. She had two goals before she passed. She wanted to take a trip to see her family and celebrate her 50 years of marriage. In early June, she made the trip to see the family. On July 14th she celebrated their 50th. Shortly thereafter, the cancer took over and completed its job. Joyce is survived by her husband Roger, a brother Richard (Gloria) of Cheyenne Wyoming, a sister Janice (Gary) McClure of Hot Springs South Dakota, and another brother Gary (Trayce) of Hot Springs South Dakota, along with cousins, nieces and nephews, as well as grand nieces and nephews. Joyce is preceded in death by her parents Arden and Jeannette and an older brother Dwayne. Celebration of life services will be held in San Diego and South Dakota at a later date. Joyce requested that in lieu of flowers that folks night consider making a donation to the veteran organization TunnelsToTowers, a cancer charity, or a charity of their choice. Fond memories and expressions of sympathy may be shared at www.elcajonmortuary.com for the BESEKE family.
VER MÁS VER MENOS