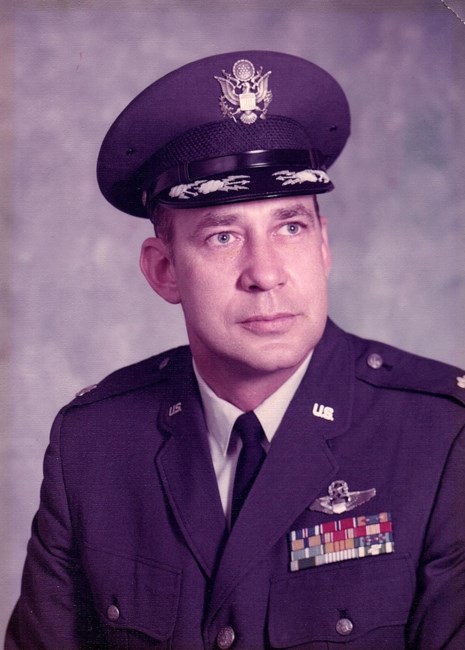 Homer D. Pauley Sr., 95 years of age, a retired air Force Lieutenant Colonel passed away on January 20,2022 in Fort Worth. Homer was born in Austin Minnesota to Peter and mabel Pauley, who precede him on death. Homer graduated from Austin High School and attended the University of Minnesota. He entered the Air Force and upon graduation from pilot training, as a second lieutenant, was assigned to Houston as a mission pilot for student navigators. While there he visited friends in Beaumont where he met and married Jeanine Netterville before going to Korea. After flying 55 combat missions in the B-26 in Korea, he was assigned to the Air Defense command flying F-94-C and F-89-J aircraft on the east coast. He then entered the Thor missile Program and was attached to the Royal Air Force in England. On return from England he was assigned to Vandenburg AFB to participate in the development of the minuteman missile training program. At Strategic Air Command Headquarters he was in Personnel Plans and Programs working on requirements for new Aircraft, missiles and reconnaissance systems. He was then assigned to KC-135 aircraft at Carswell AFB. His tour in VietNam was with the Army as Air Force Liaison Officer and flew Forward Air Control missions in the OV-10 aircraft. Returning from Viet Nam he was appointed commander of an Airborne Missile Maintenance Squadron. His squadron received the Air Force Outstanding Unit Award. He retired to Fort Worth in July of 1974. After Retirement from the service he worked as a programmer for Tri-County Electric Co-Op, United Way, and Goodwill Ind. He was a lifelong Lutheran and belonged to Christ Lutheran Church in Fort Worth. He was preceded in death by Jeanine, his wife of 60 years, his three brothers and his sister. Survivors are; his son Homer D. Pauley Jr. (Dean) and his wife Shar, his daughters Paige and Donna Ruth, his granddaughter Kendall with her husband Rob, his grandson Johnathon and his wife Andria along with his great grandsons Shawn and Luke. He will be sorely missed by all.
VER MÁS VER MENOS