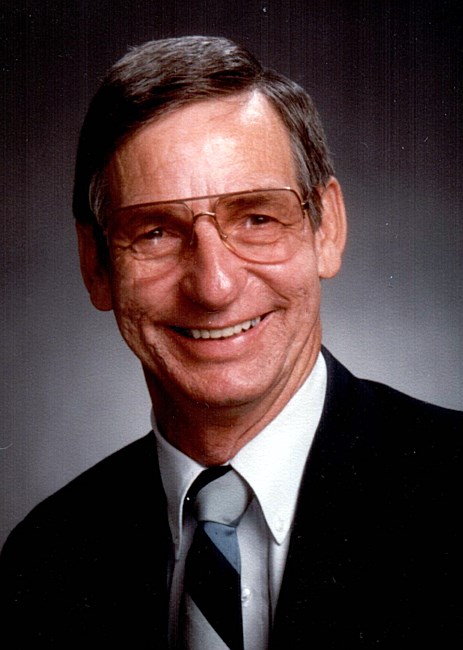 Tommy Brown, former mayor of North Richland Hills, passed away on June 12, 2019. Tommy was born in Fort Worth on February 15, 1930 to Benjamin and Annie Brown. Tommy is predeceased by his parents, his sisters, Gretchen and Imalove, and brothers Ben, Mark, Jean, Bill and Brian. He is survived by Sue Brown, his wife of 46 years, daughter Julie Gunter (Mike), daughter Sharon Brown, and son Randy Brown (Holly). He is also survived by his three grandsons, Jeremy Neeley (Nora), Riley Gunter and Cole Gunter, granddaughter Sofia Brown, great-granddaughter Mia Neeley, sister Dorothy Butler, and special niece Tori, as well as numerous other nieces and nephews. Tommy was a lifelong resident of Tarrant County and a 60-year resident of North Richland Hills. After serving as a staff sergeant in the U.S. Air Force stationed in Okinawa, he returned to Fort Worth and worked as a journeyman printer for the Fort Worth Star Telegram during the day. At night, he attended school and obtained his degree from Texas Wesleyan University. In the late fifties, he started B&B Pest Control which he owned and operated for twenty-five years. Tommy served his community in many capacities over the decades. He was a longtime member of the Northeast Richland Lions Club and Northeast Tarrant Chamber of Commerce and helped establish programs like the Alliance for Children and Tarrant County Crime Stoppers. Tommy was a board member of Birdville ISD Foundation for Educational Excellence, Northeast YMCA, Community Enrichment Center, Cornerstone Assistance Network and Tarrant County Housing Partnership, just to name a few. As a member of North Richland Hills Baptist Church, he served on several committees and was very active in his Ambassador Bible Study class. Tommy had a passion for serving his family and his community. One of Tommy’s greatest honors was serving as Mayor of North Richland Hills from 1988 through 1998. Under Tommy’s leadership, a number of improvements helped make NRH the “City of Choice” it is today. As Mayor, he served in many capacities including Chair of the Tarrant County Mayor’s Council and Regional Director of the Texas Municipal League. During his term as Mayor, Tommy led the expansion of several unique, city-owned amenities including Iron Horse Golf Course, NRH20 Water Park, Green Valley Park and many other parks. He and Sue were honored for their service to the city with a park bearing their names in 2005. Tommy was genuine and kind with an enormous heart. He leaves many wonderful memories to his treasured group of friends and family. A celebration of life will be held at North Richland Hills Baptist Church at 2:00 pm on Tuesday, June 18, 2019. Family will greet guests in the foyer after the service. Should friends desire, donations may be made in Tommy’s memory to the Cornerstone Assistance Network or Stronger Together, two programs for which he cared deeply at North Richland Hills Baptist Church. The family wishes to thank the staff of Emerald Hills Rehab Center and Heart-to-Heart Hospice, and thanks you for honoring Tommy’s life.
VER MÁS VER MENOS

Family will greet guests in the foyer following the service