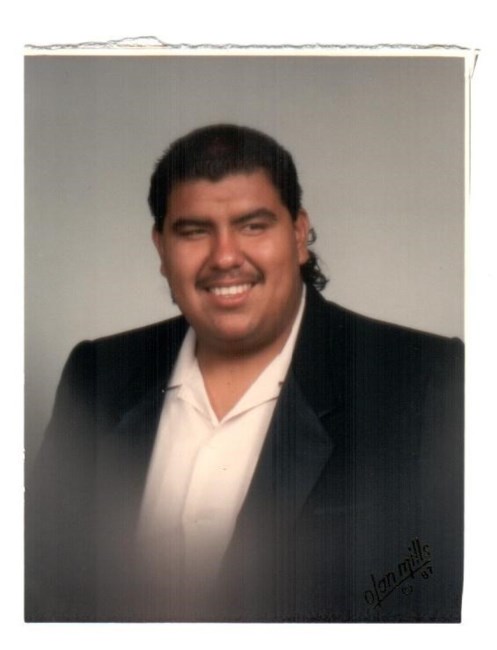 Robert Anthony Hernandez, age 53 passed away on Tuesday, September 13, 2022. Robert was born July 31, 1969 in Fresno, California. Robert Anthony Hernandez “DJ CUB” Robert Anthony Hernandez went to be with our Lord Tuesday, September 13, 2022. Robert was born July 31, 1969 In Fresno, California to Robert and Minnie Hernandez. Robert showed His love for the Lord by serving as an altar boy at St. Anthony Catholic Church and St. Agnes Mission Catholic Church in Fresno, California. He attended Clovis West High School graduating in 1987. He worked Alongside his Dad at Buckner’s Inc. Then working as a Security guard at Event Staff and Wawona’s. He loved to DJ often playing for many functions And family gatherings. In his spare time he would volunteer coaching his Nieces, Nephews at the Pinedale Boys and Girls Club. Robert had an infectious smile and a heart of gold. His love for his family And friends showed through his loyalty and compassion and his love was unconditional. Robert was a family man although he had no children, his nieces and nephews were everything to him. He enjoyed barbequing, cooking sports, and family gatherings. Robert was the strength in our family. He was our biggest cheerleader. Although Robert had limitations, He mentored many of his younger cousins. He always Found a way to encourage his nieces and nephews, cousins and friends when Playing sports often attending many of their games. Robert played little league all through elementary school coached by his uncle Diamond. He attended Clovis West High School and was part of the undefeated 1985-1986 Valley Championship football team. In 2018 Robert along with his teammates were Inducted in the Clovis West Hall of Fame and then Clovis Unified Athletic Hall of Fame. He was also Back to Back two time Champion in the Eddie Chacon Horse Shoe Tournament. Robert was proceeded in death by his father Robert Hernandez. He is survived by his mom Minnie Hernandez, His Dog REX. His sisters, Mary Helen and her husband Mike, Stephanie, Vanessa and wife Amy, Monica her husband Rueben. His nieces and nephews, Jazzmin, Julia, Desire, Mario, Jacob, Edward, Alina, Armando, Ruben, Logan, Julian, Mia. Great Niece Baby Valenzuela. And a host of Aunts, Uncles, Cousins, family and friends. Visitation for Robert will be held Tuesday, September 27, 2022 from 4:00 PM to 6:00 PM at Whitehurst Sullivan Burns & Blair Funeral Home, 836 E. Nees Ave., Fresno, CA 93720. A Recitation of Holy Rosary will occur Tuesday, September 27, 2022 from 6:00 PM to 7:00 PM, 836 E. Nees Ave., Fresno, CA 93720. A Mass of Christian Burial will occur Wednesday, September 28, 2022 from 10:30 AM to 11:30 AM at St. Agnes Mission Catholic Church, 111 W. Birch St., Pinedale, CA 93650. Robert will be laid to rest in Clovis Cemetery, Clovis, CA. Serving as pallbearers are Marcelino Salazar, Vince Benson , Melvin Hill, Jerry Chapa, Vanessa Hernandez, Mario Valenzuela III, Honorary Pallbearers, Frank Amesquita, Sr., Walter Chacon, Jacob Vasquez, Martin Chacon and Nestor Chacon. Fond memories and expressions of sympathy may be shared at www.whitehurstsullivan.com for the Hernandez family.
VER MÁS VER MENOS