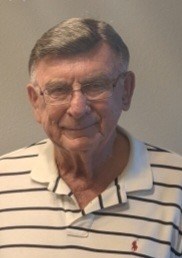 Harold Francis Baran, age 84, of Greeley, Colorado passed away on Saturday, May 7, 2022. Harold was born April 1, 1938 in Nebraska to Anton and Frances Baran. Harold graduated from Ord High School in 1958 and served in the US Army from February 1958 to January 1964. After leaving military service, he married his first wife, Doris, on October 15, 1967 in Grand Island, Nebraska. Later, he married Linda on October 15, 1997 in Estes Park, Colorado. For fifteen years, he worked as a water technician for North Weld County Water District, was a long-time member of St. Peter’s Catholic Church, and served under the Knights of Columbus (VA KOC AA). Harold was an avid fisherman and enjoyed leather working and musket loading craftsmanship; he loved working and creating with his hands. He was well loved by his abundantly sized family. Harold was preceded in death by his first wife, Doris; his daughter, Jenny Betts; his parents, Anton and Frances; and his sister, Carol Slagle. He is survived by his second wife, Linda; his daughters, Terry Beck, Pam Quillan, Sharyl Holland, and Christina Randall; his sons, Mark Baran (Rebecca Baran) and Jim Quillan; his sister, Dotti Toczek; his brother, Vern Baran; his grandchildren, Spenser Baran, Casey Randall, Emily Martin, Chelsea Betts, and Clayton “Bug” Betts; and his great-grandchildren, Elias, Charleigh, Liz, Miles, and Warren. He will also be greatly missed by his companion, Teddy. A mass of Christian burial for Harold will be held Wednesday, May 25, 2022 at 9:30 AM at St. Peter's Catholic Church, 915 12th Street, Greeley, Colorado. A committal service will occur Thursday, May 26, 2022 at 11:00 AM at Fort Logan National Cemetery, 4400 West Kenyon Avenue, Denver, Colorado. Fond memories and expressions of sympathy may be shared at www.stoddardsunset.com for the Baran family, and other memorial contributions may be made out to the Wounded Warrior Project.
VER MÁS VER MENOS