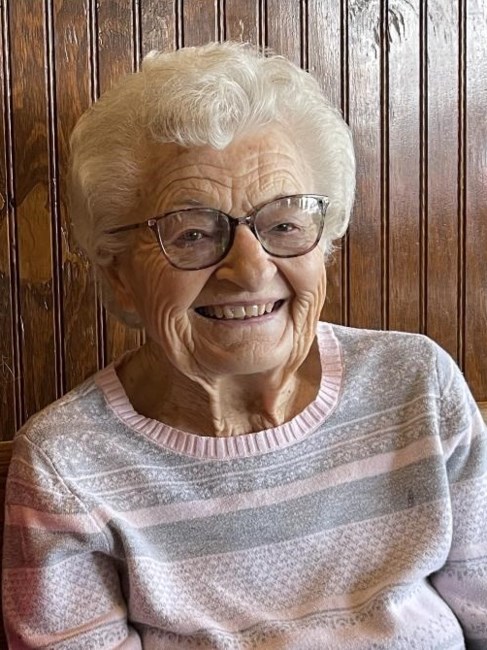 Ruth Rose (Yeager) Trupp, of Prospect Valley, died peacefully in her home on Saturday, September 24, 2022, surrounded by her entire family. She was 93. Ruth was born to Samuel and Amelia (Beckel) Yeager on November 14, 1928, in Berthoud, Colorado. She spent her younger years in Berthoud and Fort Lupton. At age fourteen she moved with her family to Prospect Valley where she attended Prospect Valley High School. She was the captain of her high school volleyball team, she met her high school sweetheart and graduated in 1947. On December 5, 1948 she married Raymond Trupp in Greeley, Colorado. Immediately after their marriage began, Ruth and Raymond turned a one room shack, in Prospect Valley, into their family home where they raised three sons. Ruth continued to live in that same home until her death. Ruth was a member of Zoar Congregational Church in Prospect Valley from 1948 to 2018. She was an active member of the Ladies Aid Society and she taught Sunday School for many years. In 2018, she became a member of Zoar Baptist Church in Prospect Valley. Before Ruth became an integral part of the family farm, where she would hoe the beets, plow the fields, and drive the harvest truck; she worked in a local hospital caring for newborns and elderly, as a switch board operator and in the kitchen at Prospect Valley School, where her and her mother-in-law made home cooked meals for the school children. She was an avid bowler and continued in her league until age 86. She also enjoyed traveling, gardening, crocheting, sewing, quilting, cooking and baking. She would bake 350 chocolate chip cookies at a time and would never let the cookie jar go empty. She made it clear to anyone who knew her that they were always welcome to join the family for the noontime meal, all you had to do was “make a reservation”. She enjoyed being with her family and she supported all of her grandkids and great grandkids, attending all of their activities including school plays, 4-H and fair events, she especially loved attending all of their sporting events. All of the friends of her grandkids and great grandkids simply referred to her as “Grandma Ruth”. She was an special lady who was generous and kind, never met a stranger and she touched the lives of many people. She is survived by her three sons Tim (Kathy), Barry (Lori) and Kerry (Debbie) Trupp of Prospect Valley, Colorado. Seven grandchildren Kelly (Thomas) Beach of Prospect Valley, Kim (Danielle) Trupp of Costa Rica, Allen (Kaly) Trupp of Erie, Trevor, Justin, Kirstie and Ben Trupp all of Prospect Valley. She was also blessed with four great-grandchildren Jessica and Jordan Beach; Charley and Otto Trupp. She is also survived by her brother, Raymond (Dorothy) Yeager of Greeley and sisters Esther Klemm of Lees Summit, Missouri; Sandra (Bob) Grangaard of Hayden Lake, Idaho and many nieces and nephews, friends and family. She was preceded in death by her husband Raymond, her parents Samuel and Amelia Yeager, her closest friend and sister-in- law Helen (Trupp) Altergott and her brother-in-law David Klemm. In Lieu of flowers, a memorial contribution can be made to Zoar Baptist Church. Services for Ruth are set to be held on October 1st, 2022 at Allnutt Funeral Service - Macy Chapel Located at 6521 W. 20th St, Greeley CO, 80634. The visitation will be opened to the public at 9:00AM, with funeral services beginning at 10:00AM. A graveside procession will follow services, leading to Linn Grove Cemetery, 1700 Cedar Ave. in Greeley, CO. A reception in celebration and memoriam of Ruth's life is estimated to begin at 1:00PM with the conclusion of other services. Serving as pallbearers are Allen Trupp, Trevor Trupp, Justin Trupp, Ben Trupp, Thomas Beach, Ronnie Yeager, Stephen Klemm, Bruce Klemm, Arnie Klemm and Randy Yeager.
VER MÁS VER MENOS