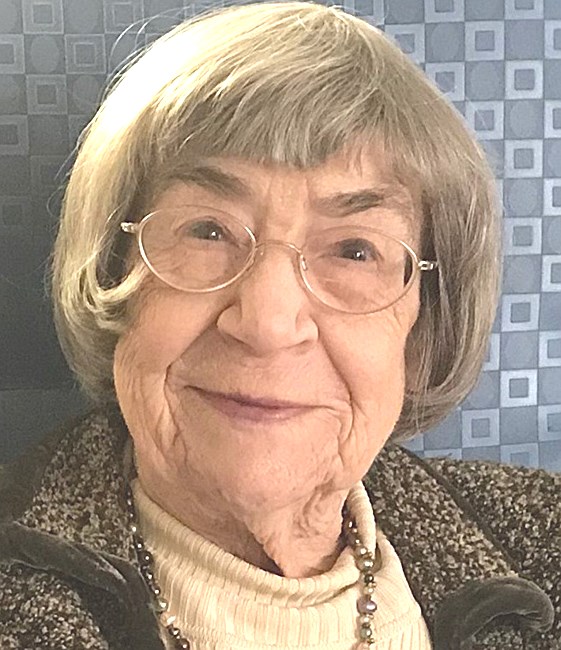 Hannah Martin Davis Hammer died at home with her family present in the early morning hours of Wednesday, Sept. 28, two days short of her 95th birthday. A Mass of Christian Burial will be held at 11 a.m. Tuesday, Oct. 4 at St. Pius X Catholic Church. The family will receive friends in the Simmons Parish Center after the mass and burial will follow at 3:30 p.m. in the West End Cemetery in West End, NC. Mrs. Hammer is survived by her six children, Katherine Anderson and her husband Ed of St. Louis, Missouri; John Hammer and his wife Elaine of Greensboro; Johannah Stern of Greensboro; Elizabeth Hammer Still and her husband Bill of West End; Nathaniel Macon Hammer and his wife Susan of Salisbury; William Hammer and his wife English of Summerfield; her sister Mary Jo Doeringer of Flossmoor, Ill.; 20 grandchildren and 20 great grandchildren. She was predeceased by her husband of 53 years J. Richard “Dick” Hammer. Mrs. Hammer was born Sept. 30, 1927 in the family home in Warrenton, NC, the second daughter of Martin J. and Ethelyn Von Canon Davis. After the death of her father in 1936, the family moved to the home of her maternal grandparents in West End. At the age of 15, Mrs. Hammer matriculated to Greensboro College and in 1947, as the youngest member of her class, graduated from the University of North Carolina at Chapel Hill with a degree in drama. For three years, Mrs. Hammer, as an employee of the North Carolina Department of Health, traveled to every county in the state performing a puppet show on dental health. On March 31, 1951, she married Dick Hammer, and in 1956 moved to Greensboro where she resided until her death. Mrs. Hammer was a longtime member of St. Pius X Catholic Church, serving for many years on the Parish Council and, beginning in 1973, she was an active member of the St. Joseph Prayer Group. For decades she was a leader of the annual Jubilee retreat held for St. Pius parishioners where she spoke about forgiveness and deeply touched many lives. She was chairman of the Catholic Renewal Team for the Diocese of Charlotte for two years and served as co-chair for a diocesan committee to study the role of women in the church. Along with being a mother, grandmother and great grandmother, Mrs. Hammer, until she was well into her 80s, was a sought-after and charismatic speaker. She spoke at churches of many denominations in Greensboro and throughout the region. As long as her health permitted it, she offered Christian counseling for people from all walks of life in her home. She was often sought out by those who were in a crisis state in their lives and she made many lifelong friends and admirers by helping people in their biggest time of need. Mrs. Hammer was beloved by a wide assortment of friends not only for her generosity in counseling others but in her optimism, her joyous, encouraging nature and her wickedly quick wit. She took pride in her ability to make people laugh, which she did at every opportunity, often at her own expense. When asked her goal in life, Mrs. Hammer said, “To get to heaven and take with me as many people as possible.” The family will receive friends at Hanes Lineberry Funeral Home at 515 N. Elm St. from 5:30 to 7:30 p.m. on Monday, Oct. 3. In lieu of flowers, memorial contributions may be made to the St. Francis Springs Prayer Center, 477 Grogan Road, Stoneville, NC 27048. Online condolences may be offered at www.haneslineberryfhnorthelm.com.
VER MÁS VER MENOS