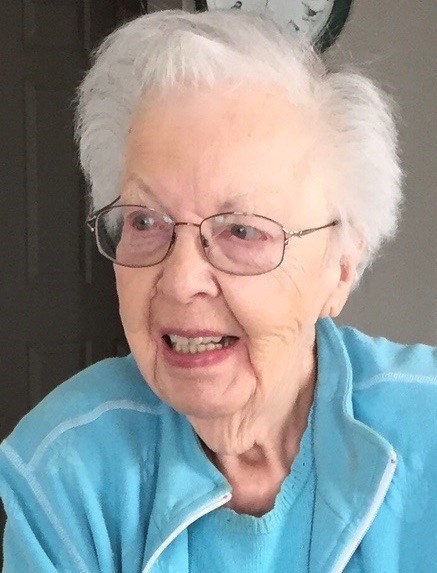 A. Jane Kline, 103 of Huntington passed away on Sunday, November 13, 2022 at Heritage of Huntington. She was a 1937 graduate of Andrews High School. Jane was a bookkeeper for the Singer Corp. for 30 years, in Huntington and Fort Wayne. She also held her realtors license for a short time. Jane was a former member of the Eastern Star and a member of Trinity United Methodist Church. Jane was born on April 14, 1919 in Andrews, Indiana, the daughter of Lewis and Ethel (Brewer) Pratt. She was united in marriage to Homer F. Kline on September 15, 1937 in Lincolnville, Indiana. Homer preceded her in death on October 21, 2017. Survivors include a nephew: David (Betty) Pratt of Huntington; a great niece: Katie (Robert) McLaughlin of Venice, FL. She was preceded in death by her parents. A Gathering of Family and Friends will be held on Friday, November 18, 2022 from 1:00 pm – 2:00 pm at the Myers Funeral Home Huntington Chapel, 2901 Guilford Street, Huntington, Indiana. Graveside service to follow at the Riverside Cemetery in Andrews. Memorial donations can be made out to Donor’s Choice of Charity, sent in care of Myers Funeral Home, 2901 Guilford Street, Huntington, IN 46750.
VER MÁS VER MENOS