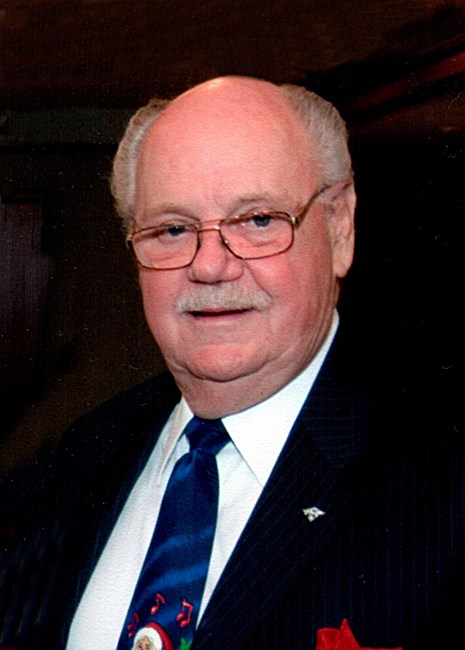 Karl Robert Roscoe, Sr., 87, passed away peacefully Sunday June 5, 2022.. He was the owner of Roscoe TV, 74th & Wornall Road for many years. He was born to Leon and Irene Roscoe October 1934. He is survived by his wife Kay Roscoe, of the home, son Karl R. Roscoe, Jr. (Kathy) of Independence, MO, daughter Teri Russel (Rick) of Raymore, MO, daughter Pam McQueen of Port Lavaca,TX, brother Donald Roscoe (Lucille) of Overland Park, KS and sister Vivian Ofner of Paola, KS, step-son Michael Sherman of Atlanta GA, nine grandchildren, seventeen great-grandchildren, one great-great-grandson and many nieces and nephews. He was preceded in death by his parents, brother Leon Roscoe Jr, sister Louise Ofner and son Charles Roscoe Karl attended Westport High School and UMKC. He served in the 101st Airborne Division of the Army, he also served on the boards of Ozanam, Art of the Cars Concurs, Mayor's Prayer Breakfast – Breakfast at Eight Breakfast Club, Past President of Kansas City Breakfast Club 1988, Past President Downtown Rotary Club 13 1995-1996, President of of Native Sons and Daughters of Kansas City 2021-2022. He was a member and past treasurer for The New Theatre Scholarship Guild, served as Church Administrator for Wornall Baptist Church for several years. Member of Swope Park Masonic Lodge over fifty years, member of Ararat Shrine Temple, was in the Oriental Band and served as President of the Old Car Unit. He was Past Director of Royal Order of Jesters (ROJ) Court 54. He was awarded Southtowner Man of the Year in 2013. He was the organizer of Operation Airlift for service men and women serving in the Middle East. He did much volunteer work for many different Organizations. He was an avid Classic Car enthusiast and was especially proud of his 1948 Lincoln Continental Convertible driving it in many parades and for weddings, transporting the new bride and groom to their destination after the ceremony. He was a member of the Antique Automobile Club of America. Services will be at Mt. Moriah, Newcomer & Freeman Funeral Home, 10507 Holmes Road, Kansas City, MO. Visitation Friday June 10th 6:00 pm – 8:00 pm with the Funeral on Saturday June 11th at 11:00 am. Following the Funeral Service, a Royal Order of Jesters Court 54 Rose Ceremony will take place. In lieu of flowers, the family suggest that memorial contributions be made in Karl's name to Christ Community Church, Brookside Campus, 400 West 67th Street, Kansas City, MO 64113.
VER MÁS VER MENOS