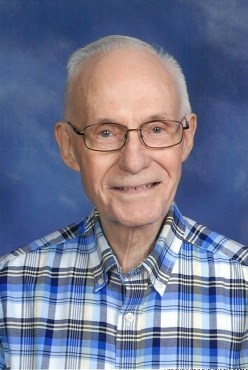 He worked as an apprentice at a local print shop until being called to serve his country during the Korean war where he was an MP stationed in Louisiana and Kansas. Shortly after his return to civilian life he got a job working in the printing department of Hallmark Cards where he worked for 33 years until his retirement.

He soon fell in love with and married his childhood friend and neighbor, Norma Krueger in 1957 and they shared a full life together for 63 years. They were surrounded by Gale’s brothers, including his twin, their spouses, and many cousins. He enjoyed spending weekends at their home at the Lake of the Ozarks where they spent 12 years after retiring before returning to Independence. He enjoyed working jigsaw puzzles and visiting with the men in his senior living community as they solved the world’s problems. He enjoyed the weekly game night with family after sharing a meal and was a life-long Royals and Chiefs fan.

He served his Lord and Savior as a member of Calvary Presbyterian Church (Independence, MO), Westlake Christian Church (Laurie, MO) and Trinity Presbyterian Church (Independence, MO). Gale was known by all who met him as a kind and gentle man. His quiet decency and sweet sense of humor will be sorely missed by all lucky enough to have known him and to have called him neighbor, colleague, father, brother, uncle, cousin and friend.

The visitation for Leonard will be held Saturday, November 20, 2021 from 1:00 PM at Newcomer's Floral Hills Funeral Home, 7000 BLUE RIDGE BLVD, KANSAS CITY, MO 64133, until the funeral service at 2:00 PM. Committal service & military honors will occur after the funeral at Floral Hills Cemetery.