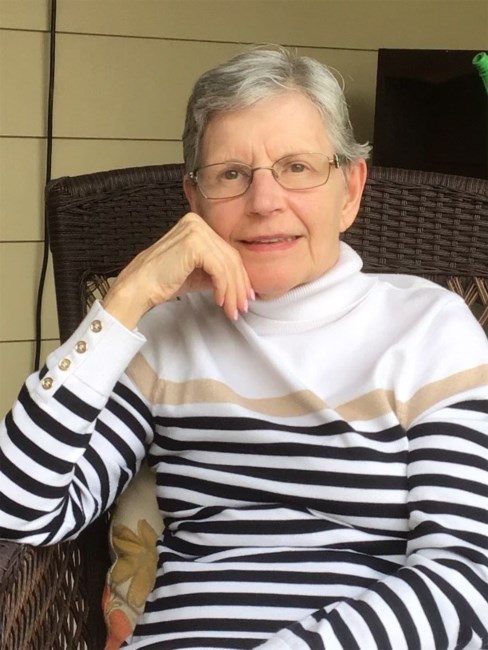 Wendi Jean Nielsen (Boettcher) born on February 26, 1945, of Leawood, Kansas passed away peacefully on September 30, 2022 at the age of 77 following a 5-year battle with Alzheimer’s. She was preceded in death by her husband Harry, her father Wendell Boettcher, and mother Mary Jane Boettcher. She is survived by her son and daughter-in-law Kevin and Mellissa Nielsen and their children Kendall, Taylor and Caleb and son and daughter-in-law James and Mollie Jo Nielsen and their daughter Olivia, along with her brother Bruce Boettcher and sister-in-law Connie Boettcher. Wendi was born in Warrensburg, Missouri as the first-born child to Wendell and Mary Jane. 4 years later, the family grew with the addition of Wendi’s brother, Bruce. While Wendi was in elementary school, the family relocated to Dewey, Oklahoma. Wendi was a proud Bulldogger and graduate of Dewey High - Class of 1963. Wendi always spoke of fond memories of her childhood and her lifelong friends Jessie, Janie, and Anne. After graduating high school, she moved to Kansas City to attend St. Luke's School of Nursing. When Wendi wasn’t studying, she loved going to the Levee to enjoy live music with her classmates. After graduating in 1967, she moved to Bartlesville, Oklahoma to begin work as a Registered Nurse (RN) at Jane Phillips Episcopal Hospital in the newly established Coronary Care Unit. After a few years, Wendi returned to Kansas City and began working at North Kansas City Memorial Hospital. It was here that she met Harry Nielsen. They married in June of 1973. Harry and Wendi loved to entertain family and friends, go to Royals games, tailgate with friends on the hill at Kansas Jayhawks games, travel, dance and spend time with their children, Kevin and James. They lived in Kansas City, Missouri until 1986, when the family relocated to Leawood, Kansas. It was at the house on Cherokee Lane where Wendi met Marilyn, who quickly became her best friend. They enjoyed a sister-like bond, going on walks around the neighborhood, playing bunko and bridge and attending the Plaza Art Fair. For many years, Wendi enjoyed dearly the annual cousin trip, affectionately referred to as the “ASB GAG”, which stood for the “Alice Schirmer Boettcher’s Granddaughters All Gather” event. Family would anxiously await her return to hear stories of their many adventures together. Wendi’s greatest joys were her 4 grandchildren - Kendall, Taylor, Caleb, and Olivia. Wendi loved playing and spending time with them as often as she could. Wendi will be so dearly missed by her family and friends. She was an amazing mother, wife, grandmother, aunt, cousin, friend and nurse. Her warm and open heart will be missed but never forgotten. Everyone who knew Wendi knew they could count on her for help whenever needed – often with food like Celebration Soup, No Bake Cookies, Texas Sheet Cake, Sausage Stars or Houston’s Spinach and Artichoke dip in hand! Visitation will be at McGilley State Line Chapel on Monday October 3rd from 5:00 PM to 7:00 PM. Funeral Service will be held at 10:00am on Tuesday, October 4 at McGilley State Line Chapel. Interment will follow in Pleasant Valley Cemetery. The family would like to thank you all for the friendships provided to Wendi throughout the years. In lieu of flowers, donations can be made to Ascend Hospice Care.
VER MÁS VER MENOS