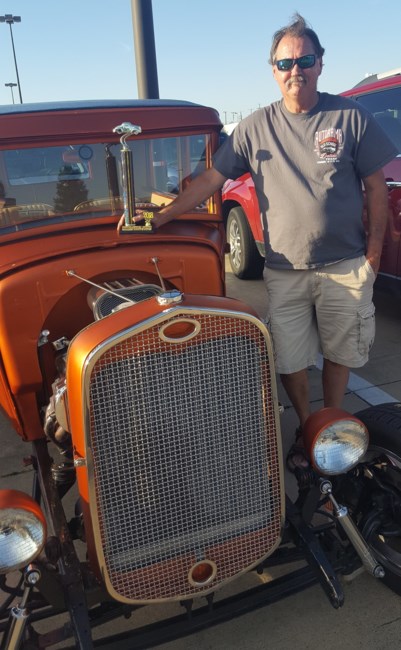 David Wayne Knapp, 59, peacefully passed away on the morning of November 19, 2021 at home in Keller, Texas with the love of his life beside him. He fought a tough battle of cancer for 15 years. He was born on November 17, 1962 in Portales, New Mexico. David was the beloved husband, soul mate and best friend for 36 years to Angela Knapp. He was a dedicated and loving father of 3 boys, David Eugene Knapp of North Richland Hills, Timothy Ryan Knapp of Poolville, and Brandon Lee Knapp of Fort Worth; he loved his daughters-in-law Ashley, Kelsey, and Kaitlyn. The tremendous joy in his life were his grandchildren, Shayne and Hazel Knapp of Poolville and Hailey Knapp of North Richland Hills. If David was not playing with grandkids or his fur babies, he was bass fishing, or building cars. His girlfriend was the 1930 Ford he built piece by piece in his garage. David was an amazing and kind man to all. David was born to Alvin Cutting Knapp and Dorothy Henderson. He graduated from West Columbia High School in Texas to serve his country through the Army 1st Cavalry, C Company, 8th Engineer Battalion in Fort Hood, Texas. David participated in the “Grenadero I” exercise in Cucuyagua, Honduras under unfavorable conditions to build a runway, wire perimeters, road barriers, bunkers, etc. He was honorably discharged in 1987. David is preceded in death by his parents, a brother and three sisters. He is survived by his wife Angela; Gene and Sandy Rodgers of North Richland Hills ( the in-laws he cherished), 3 sons, 3 grandchildren, and brothers- Allan Knapp of Fair Oaks Ranch, Tx; Michael Knapp of Brazoria, Tx; Kevin Knapp of Amarillo, Tx; and Alvin Knapp of Tennessee. Services will be held on Wednesday, November 24, 2021 at 10:00am, with viewing 8:00-10:00 am at the Keller’s Old Town Funeral Home in Keller, Texas.

Fond memories and expressions of sympathy may be shared at www.kellersoldtownfuneralhome.com for the Knapp family.