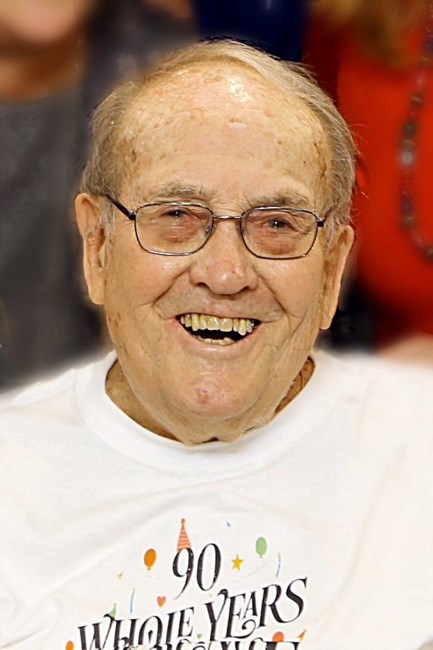 Richard (Sparky) Towne Adams, Sr. passed away on September 30, 2022, after a long illness. Husband of Jean A. Adams (deceased) for 64 years, father of Richard Jr. (Susan), Penny and Amy Goudy (Keith), grandfather of Alexandria (Eric), Shelby, Rachel, Cory and Brian. He was proud of them all. Sparky was a member of the Kenmore United Methodist Church where he volunteered in many positions, including a Sunday School teacher. He and his wife Jean were volunteers at the West Side Soup Kitchen. Sparky was a 1949 graduate of Silver Creek High School where he excelled in football, basketball and track. He then attended Brockport State Teachers College. He interrupted his education in 1951 to enlist in the U.S. Navy to serve during the Korean war. He proudly served our country on the aircraft carrier USS Randolph, the number 11, as he liked to refer to it. After being Honorably Discharged, Sparky finished his education, graduating with a Bachelor’s in Education/Physical Education. He went on to earn his Master’s degree from the University of Buffalo. In 1956, besides marrying Jean, he started his career teaching physical education and coaching football and basketball in the Rochester (N.Y.) Public School System. In 1959, Sparky was hired by the Kenmore/Town of Tonawanda School System as a Physical Education Teacher. He also became an assistant football coach at the old Kenmore High School (now Kenmore West) under the esteemed head coach Jules Yakapovich. When Kenmore East High School opened in 1959, Sparky transferred to East to become a physical education teacher, assistant football coach under Jack Oelkers and head wrestling coach. In 1964, he was named head varsity football coach and resigned as wrestling coach and became a wrestling official for many years. Sparky taught and coached with a mantra of working for excellence, caring, encouragement and compassion; while discipline, dedication and hard work were how success was attained. He wanted to bring out the best in all his students and athletes, while making sure everyone had fun and pride in being a Kenmore East Bulldog. He loved the underdog, always stressing “It’s not the size of the bull in the fight, it’s the size of the fight in the bull!” As the head football coach at Kenmore East, Sparky dedicated himself to finding ways to make his players become the best they could be, both on and off the field. During his career, his teams won 6 Niagara Frontier League championships, and had two teams ranked #2 in NYS and one ranked #1 (1974 beat #1 Sweet Home to take over #1) by the NYS sportswriters. His final season at KE was 1977, where he went out winning another NFL championship and being voted WNY High School Coach of the Year. After retiring, from coaching, Sparky took a year off to watch his son, Rick, finish his college football career. In 1979, he became the offensive coordinator for the University of Buffalo football team. In 1982, he was hired as offensive coordinator at Canisius College and ended his career at Buffalo State, as the defensive coordinator under exemplary head coach Jerry Boyes. He then was hired by the Buffalo Bills to become a college and professional player scout for their scouting combine BLESTO. No matter where he was in life, his pride and passion for Kenmore East football never waned. He, along with his best friend Coach Lou Reuter, volunteered to help the Benjamin Franklin Middle School football team, knowing that they would help youngsters become future KE Bulldogs. And at age 80, he went back to coach at Kenmore East as their offensive and defensive line coach. Sparky modestly accepted the many accolades that followed his tenure as head coach at KE, acknowledging that his success wouldn’t have happened without his wife Jean and the hundreds of student athletes whom he coached. He has the most wins and championships in KE history. For his coaching success and mentoring the student athletes at UB, he was honored by the school for his service. In 1994, he was one of the first inductees into the Kenmore East Athletic Hall of Fame. In 2007, he was given the ultimate honor, as the KE football stadium was forever renamed the Dick “Sparky” Adams Field. Sparky was a selfless, humble individual, who felt his obligation was to help people become better, whether morally, spiritually, socially, economically or athletically. He tried to teach honesty to yourself and others, discipline to become the best individual possible and loyalty to family, friends and community. Working with teenagers and young adults, he had to instill confidence and had to model respect, etiquette and friendliness. He also stressed humbleness in winning and sportsmanship in defeat, no matter on the field, in the classroom or in life. Funeral services are private on Tuesday October 4th, 2022. A Celebration of Life will occur on October 29th, 2022 at Dick “Sparky” Adams Field, Parker Blvd., Tonawanda at 12 noon.. In lieu of flowers, donations can kindly be made to the Richard T Adams Scholarship fund. Make checks payable to KE Alumni Association with the memo on your check reading “Adams Scholarship”. Mail your donation to: KE Alumni Association 350 Fries Road Tonawanda, NY 14150
VER MÁS VER MENOS