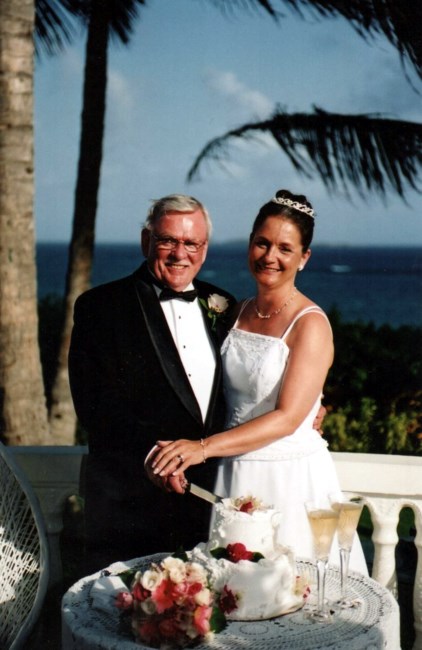 Edward Noah Atchley, aged 81 of Knoxville, TN, passed away on the morning of Tuesday, April 19, in Houston, TX, surrounded by family. After battling lung cancer for nearly a year, he succumbed to pneumonia. Ed was born in Knoxville, TN, on March 27, 1935, to Curtis and Alma (Wells) Atchley. Ed was married to Vicki Felker on May 24, 2003, in the US Virgin Islands. Ed graduated from Young High and he attended the University of Tennessee, where he became a lifelong fan of the Volunteers. Game days were all-day affairs from tailgating before the game, the game itself, and even more tailgating after the game. Ed loved boating and worked his whole life in the marine industry. He worked for a marine engine company and then operated a marina in St. Pete Beach, FL, before joining Cobia Boats, at which he eventually became the President and part owner. He loved offshore fishing and that love grew even more after acquiring Robalo Boats. He always looked forward to the annual Robalo Owners’ Tournament held in the Florida Keys or in Bimini, Bahamas. After selling Cobia and a brief retirement, he went back to work in the industry joining the American Boatbuilders Association, which allowed him to stay active in the industry he loved and in contact with his many friends. Ed is survived by his wife Vicki, his children Terri Atchley (Shon) LeGette, Scott (Kate), and Dean (Elena), his step-daughter Stacey (John Paul) Williamson, his grand-children Jordan, Jada, Lilly, Anjelika, Sam, and Dillan, his step-grandchildren William and Tristan, and his brothers Ben (Sue), Bob (Joyce), and Blaine (Carol). Ed was preceded in death by his parents, Curtis and Alma, and his brother, Jack. Funeral services will be held at Berry Highland West at 9913 Sherrill Blvd, Knoxville, TN, on Saturday, April 30, at 5 pm with visitation from 2:00 PM until 5:00 PM. The entombment will be private. In lieu of flowers, memorials may be made to MD Anderson at https://goo.gl/lkBvKP. The family would like to thank the staffs of TN Cancer Specialists, Thompson Cancer Survival Center, and especially MD Anderson for their dedicated care of Ed and support of Vicki while they were in Houston. Condolences may be offered at www.berryhighlandwest.com
VER MÁS VER MENOS