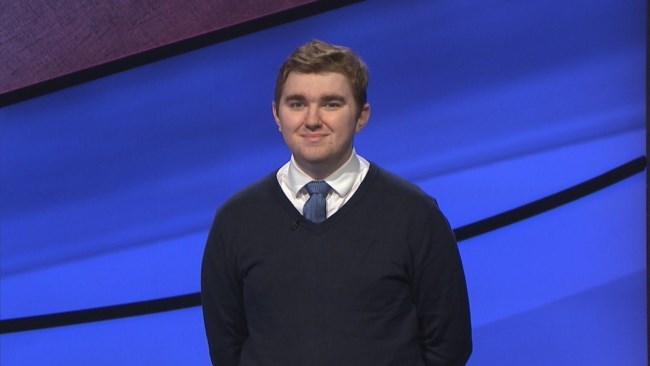 Brayden Andrew Smith passed away Friday morning, February 5, in Las Vegas, Nev. He was 24. Brayden attained a lifelong dream as a five-time champion on the popular Jeopardy! television game show. His appearances were among the last hosted by Alex Trebek, and Brayden was hailed on social media as “Alex’s Last Great Champion.” He was looking forward to competing in the show’s Tournament of Champions. A 2020 graduate of the University of Nevada, Las Vegas with a degree in economics, Brayden intended to attend law school and become an attorney for the federal government. He was a voracious reader and autodidact, a lover of knowledge and an advocate for justice. His room was bursting with books on political science, philosophy, economics and history. He recently served as an intern with the prestigious Cato Institute in Washington, D.C., where he researched criminal justice reform issues. At Liberty High School in Henderson, Nev., Brayden was a National Merit Scholar semifinalist, was active in the Junior Classical League and captained his school’s Quiz Bowl team to back-to-back state runner-up finishes. He made the game’s all-star team both years, and in his senior campaign was named the Harvey Dondero outstanding player, earning a college scholarship. Brayden loved classic and not-so-classic movies. He could be explaining the symbolism in Citizen Kane one moment and the comedic timing in Dumb and Dumber the next. He played the saxophone and enjoyed listening to a variety of music, from Duke Ellington, Chet Baker and Miles Davis to the Beach Boys, Steely Dan, and Toto. He was an avid sports fan, cheering on the Detroit Tigers and Vegas Golden Knights. The second of four sons, Brayden was born in Henderson, Nev. on September 6, 1996, to Scott and Deborah (Rudy) Smith. They survive, along with his brothers Bryce, 26, of Reno, Nev., Brock, 18, and Brody, 15, both of Las Vegas. Other survivors include maternal grandparents Larry and Anne (Gable) Rudy of Plainfield, Ind., paternal grandmother Wanda (Pavey) Smith of Crawfordsville, Ind., uncle David (Cathy) Rudy of Greenwood, Ind., aunt Dianne (Jeff) Kessler of Algonquin, Ill., and cousins Taylor Rudy, Samuel and Benjamin Kessler, Amy Gigante, and Chrystel Lott. Arrangements are pending. Donantions in Brayden’s memory may be made to https://charitysmith.org/memorial-funds/brayden-smith-memorial-fund/
VER MÁS VER MENOS