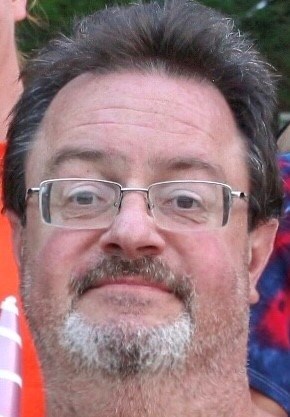 DAVIDSON, Michael C. 61, of Turner, Maine, formerly of Coventry passed away Friday, October 28th Born in Providence, RI, he was the son of the late David A. and Liliane (Blais) Davidson. He attended Coventry High School and the Community College of Rhode Island where he earned his Associates Degree. Mike was a kind, caring, and zany guy all in one. Those who knew Mike would all agree he was unique man who truly had a heart of gold and sense of humor like no other. He began playing the drums back in junior high school and found his passion for music. He was drawn to the band YES and emulated their abilities to his own. He was talented beyond words and could quickly pick up any instrument and play it like he had performed for decades. He played in numerous bands over the years and will be remembered for his musical gifts and ever fun-loving personality. He truly would light up a room wherever he went. Mike will always be remembered for the legacy of music in his “Mike Davidson’s All-Star Christmas” series which he wrote, produced, and performed with friends, family, and local musicians over 6 album series that spanned 20 years. A project he loved and put his heart into with each album. He moved to Turner just over a year ago. His love for Maine and the silence of nature drew him there where his heart always belonged. Years of vacationing with family and friends in Bridgton and Sweden, it was a place that always felt like home. Michael is predeceased by his parents, and leaves behind his sister; Christine D. DeGraide and husband Jay of Coventry and two nephews, Justin D. DeGraide and Jared J. DeGraide. A gathering and celebration of his life will be held at a later date to honor and remember his incredible soul.
VER MÁS VER MENOS