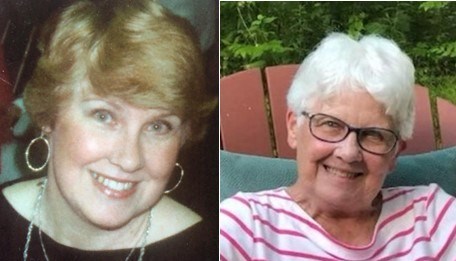 Rita (Simon) Grenier, 82, died Thursday, September 22, 2022, after a two-year journey with cancer. She passed away peacefully at her home in Lewiston in the loving care of her children, with the sounds of music playing and pouring rain outside her window. She displayed incredible courage after her cancer diagnosis. Her convictions about her treatment plan never wavered, all during the high point of the pandemic. Born on October 12, 1939, in Lewiston to Edgar and Marie Jeanne (Caron) Simon, Rita was only 9 months old when her father died, having never been able to hold her due to his illness. Rita attended Holy Cross School and graduated from Lewiston High School in 1958. She worked in the accounting department at Bates Manufacturing and spent time in New York City for work. She married her husband, Thomas, on September 1, 1962. He predeceased her in 2000. Rita was a survivor who was very close to her only sister, Simonne, and her mother, having cared for them both during their illnesses. She also showed grace and strength after the sudden passing of her husband, Thomas. She continued to lead and care for her family and developed many friendships and hobbies. Rita was fiercely loyal to whom she referred to as “my people.” She enjoyed bowling, playing bunco, piano, card games, going on car rides, plays, talking on the telephone, and watching tennis. A cat lover, she adored every cat she saw. Rita was proud of her French-Canadian heritage and was a member of several French speaking clubs, including Club Richelieu, Survivance Francaise, and La Rencontre. She was also a wonderful caregiver and nurturer. Her devotion to her family was evident until her passing. She is survived by four children and their spouses: Michele Lamare (Michael) of Falmouth, Nicole Lussier (Marcel) of Lewiston, Thomas Grenier, Jr. (Karen Boutin) of North Attleboro, MA, and Emilie Varle (Paul) of Lewiston; seven grandchildren Michael Lamare, Jr., Robert and Rebecca Lussier, Andrew and Alexander Varle, and Abby and Kate Grenier. She is also survived by special cousins Diane Ouellette, Fernande Cyr and Priscille Labonte and special sister-in-law Monique Grenier, all of Lewiston. She is also survived by in-laws Claudette and Raymond Guilmette, John and Monique Grenier, Sonia Grenier, Marthe and Stan Stokowski, Ginette Gladu, Pierre Grenier, Bernard and Marilyn Grenier, and Paul and Anita Grenier, and many nieces, nephews, cousins, and friends. In addition to her parents and husband, she was predeceased by a son, Joseph, in 1967, and her only sister and her husband, Simonne and Raymond Viere, both in 1997. The family would like to thank the healthcare providers who helped Rita during her illness and the caregivers of Androscoggin Home Healthcare + Hospice for the wonderful care Rita received during her final weeks. Visitation will be 4-7 pm Thursday, September 29, at The Fortin Group, 70 Horton Street, Lewiston. A service will be held 11 am Friday, September 30, at St. Peter’s Mausoleum, Deer Road, Lewiston. Online condolences may be shared with her family at www.thefortingrouplewiston.com Those wishing may make donations in her memory to Androscoggin Home Healthcare + Hospice, 15 Strawberry Ave in Lewiston and/or Greater Androscoggin Humane Society, 55 Strawberry Ave in Lewiston.
VER MÁS VER MENOS