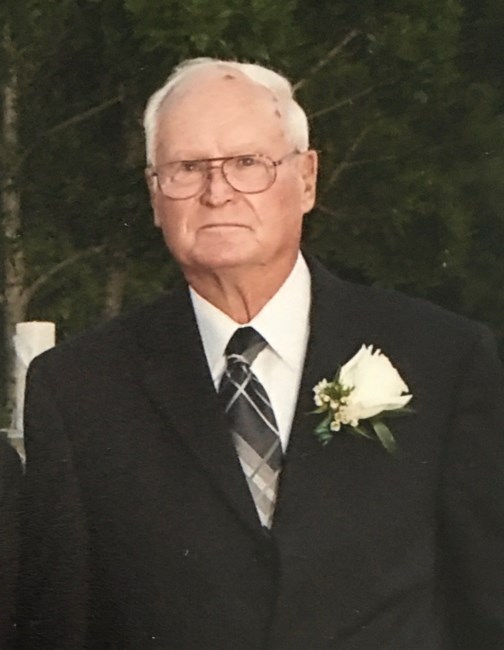 Bernice Jeter Hyde was born on October 5, 1929, to parents George Walter and Mary Alabama (Jeter) Hyde. He entered into eternal rest on January 9, 2021 at the age of 91. Bernice lived in Mabank his entire life and his love for the community helped it grow into what it is today. He attended Stamps Baxter Music School in the early 40’s in order to pursue his love for music, his parents bought him a guitar so that he wouldn’t play football. He did receive an offer to play minor league baseball but wasn’t able to go because he had prior obligations with the cotton fields and family. Bernice graduated from Mabank High School in 1948 and just a few months later he married the love of his life, Reba John, on September 3 and they began their life’s journey together. Bernice and Reba were married for nearly 60 years before she went to be with the Lord. Bernice was always a larger than life character, full of energy, laughter and love. He always worked hard but he knew how to have a good time doing it. Bernice was very intelligent, driven and regimented, he used those qualities to carry him through life, opening a family appliance store in Mabank in 1951 and he opened an International Harvester Tractor dealership as well. Bernice was a member of the First Baptist Church of Mabank where you could always find him singing, worshipping and fellowshipping with other believers. He was also the lead singer for quite some time at Elm Grove Church. Bernice loved to sing, he always sang as loud as he could, with his whole heart. He was a kind, tender hearted man, a loving husband and father, an adoring grandfather. When he had grandchildren it was an extra special blessing to his heart. Bernice loved spending time with them and always made sure they had an adventure anytime they visited. Bernice was preceded in death by his parents, George and “Bama” Hyde; wife, Reba John Hyde; daughter, Cynthia Resnicek; brother, Connie Hyde; sisters-in-law, Marueen Hyde and Lucille Dyer; brother-in-law, Melvin Dyer; niece, Mary Ann Gibbs. He is survived by son, John Hyde and wife Kathie; son-in-law, Jodie Reznicek; grandchildren, Chris Resnicek and wife Danielle, Courtney Hyde Tijerinia and husband Erik, Jason Reznicek and wife Lindsay, Meghan Hyde, Brennan Reznicek Popham and husband Lance, Blaire Hyde Airheart and husband Garrett; twelve great- grandchildren; niece, Pat Moseley and husband Eddie; nephews, J.K. Hyde and wife Pam, Jim Dyer and wife Kakky; sister-in-law, Jean Hyde, as well as his beloved dog Star.
VER MÁS VER MENOS