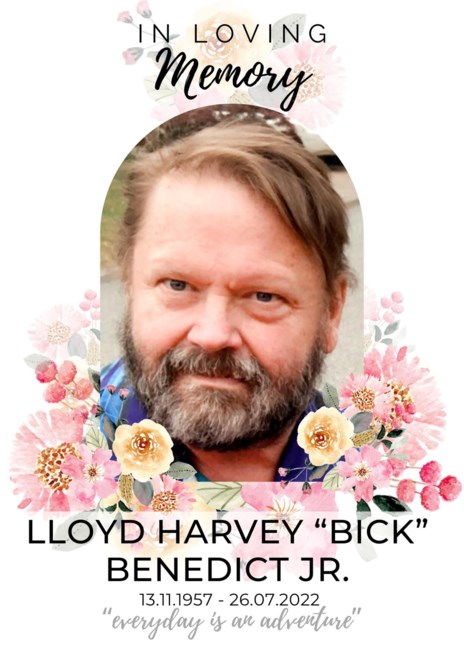 “Every day is an Adventure.” Lloyd Harvey “Bick” Benedict lived his life by these words. He was born in Bogotá, Colombia to American nationals Lloyd and Murrell Benedict. Lloyd lived a very full life within his 64 years. His early adventures included bow hunting, deep sea fishing, biking across the United States, heli-skiing, world traveling, partying, and obtaining four masters degrees, just to name a few. He lived in many countries and touched the hearts of all he met. Bick was kind and generous to a fault, highly educated, and worked in corporate United States. However, his passion and the call of the wild took him to Spatsizi, British Columbia to pursue a career in guide hunting and fishing. Later on, Bick settled in Mission, British Columbia and his adventures pivoted. He immediately immersed himself in his community. He was President of Mission Day Care Society, a driving force with Mission Soapbox Derby, and was the Mission Harbour Master for 10 years. His last job, and the one that filled his heart, was with Salvation Army as a Counselor for the homeless, and people with addictions. He too, had struggled with the grips of alcohol, but had succeeded in overcoming his addiction and proudly enjoyed his twilight years with a clear head and full heart. Not only that, but Lloyd went beyond the line of duty and dedicated his time to helping others achieve sobriety, as well. Including a few he held most dear. Lloyd, in his later years, was known as a wise mentor, an avid green thumb, and a reliable friend. He fought and overcame a lot in his 64 years. He battled addiction, mental illness, diabetes, the loss of a leg and cancers. He fought hard. He fought with grace and reminded everyone, each and every day, how to live life to the fullest and to treat each day as an adventure. Lloyd Harvey “Bick” Benedict lived life on his terms and bravely chose to leave this world on his terms as well, through medical assistance in dying. On July 26th, 2022 surrounded by family and friends, both in person and virtually, Lloyd set off on his next great adventure. “This is good.”
VER MÁS VER MENOS