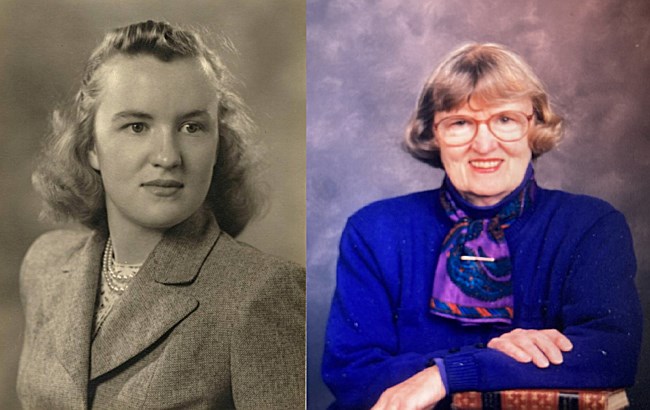 Jean Pycock (née Lamont) Passed away peacefully on September 28th, 2022, at the age of 93. Wife of the late Norman Edward Pycock. Deeply missed by her daughters Catherine (Jacques Coupal), Jane (Gabriel Kassar), Elizabeth (Alec McElcheran), step-daughter Rena Mae James, her granddaughters Laura (Félix Lamarche) and Julia (Patrick Voyer), her sister-in-law Judy Lamont, and many nieces, nephews and friends. Jean was born in Manitoba and spent most of her childhood and teen years on a farm on the banks of the Assiniboine river, near Winnipeg. She grew up during the Depression in pioneer like conditions, without electricity or running water. Her home was in the woods and she walked to a two-room schoolhouse 3 miles each day with her sister Mary and brothers John, Charlie and Frank. After graduating from university age 20, she taught school for a year in a one-room schoolhouse in Ogilvie, Manitoba, riding to school on horseback. She then moved to Montréal, obtained a teaching diploma at McGill University, taught several years and married her husband, Norman Pycock, also a teacher. Together she and Norm raised three daughters. The one huge sadness in her life was the loss of her son, David, at the age of six months. When her children grew older she worked as a pedagogical advisor at the South Shore Protestant Regional School Board, until she retired in 1994. Through her work she became familiar with the Montérégie region and eventually built a house in Havelock where she lived for 40 years. Throughout her life Jean was committed to improving lives and communities. In her early years in Montréal she actively engaged in initiatives that led to the introduction of French immersion in English schools in Montréal as well as working to promote protection of the environment. In the Montérégie she was, for many years, secretary of the Barrie Memorial Hospital auxiliary, and a leader in community organizations such as the Women’s Institute. Jean has sometimes been referred to as a "renaissance person”, reflecting the diversity of her interests and talents, among them painting, politics, writing, reading, knitting, gardening, and a love of the natural world. A celebration of her life will take place on Saturday, November 12th, 2022, at 2 pm at the Unitarian Church of Montréal, 5035 Boul. de Maisonneuve Ouest, Montréal, QC H4A 1Y5. A burial service for Jean will take place next summer at the Russeltown Flatts Church cemetery, details will follow in the new year.
VER MÁS VER MENOS