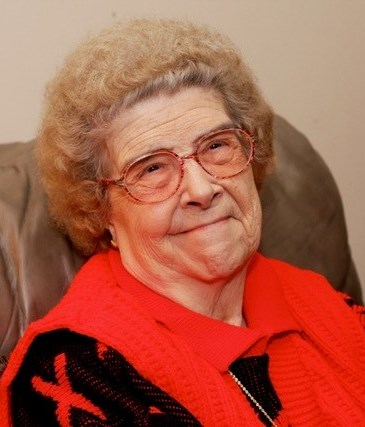 Lauretta I. LeBlanc, 93, of 1276 Hanover St. Manchester, died peacefully on Tuesday, December 26, 2017 at Villa Crest Nursing Home. She was loved and surrounded by family throughout the day. Mrs. LeBlanc was born August 3, 1924 in Nashua. She was the daughter of the late Joseph and Louisa (La Chance) Roy. Lauretta was raised in Milford where she attended school and later resided in Nashua and Hudson. She was a member of Saint Joseph Church. Lauretta was the wife of the late Lionel A. LeBlanc (the love of her life) to whom she was married 63 years. Mrs. LeBlanc worked many years for Sprague Electric and later for Alexander’s Bakery in Nashua until a stroke forced her into retirement. She enjoyed playing card games, especially poker, bingo and croteching. Until the very end her daily routine included reading The Nashua Telegraph and saying four rosaries. Her unwavering faith and commitment to her family and friends will live on forever. Lauretta’s genuine concern for those around her was impressive and she prayed for everyone. Her knowledge about current events continued and eating a lobster roll made her day! Family was very important to her and she truly enjoyed spending time with each and every member. Mrs. LeBlanc was predeceased by one brother, Roger Roy. Survivors include two sons and daughters-in-law, Lionel and Kathleen LeBlanc of Londonderry, and Paul and Paulette LeBlanc of Nashua; five grandchildren, Sharon Shaughnessy and Michelle Stevens of Nashua, Timothy LeBlanc of Londonderry, Nicole Cloutier and James LeBlanc of Manchester; eleven great grandchildren, Rick McQuaide, Bianca, Paige and Brett Shaughnessy, Scott and Adam Stevens, all of Nashua, Tyler LeBlanc of Manchester, Sarah LeBlanc of Rochester, and Zachary, Heather and Conner Cloutier of Manchester; two great great grandchildren, Hunter LeBlanc of Manchester and Dakota McQuaide of Nashua; a cousin Paul Richard of Nashua and numerous beloved nieces and nephews. A celebration of life will be held on Wednesday, January 10, 2018 from 4:00PM-7:00PM at the Zis-Sweeney & St. Laurent Funeral Home 26 Kinsley St. A Mass of Christian Burial will be held at 10AM on Thursday, January 11, 2018 at St. Joseph the Worker Parish, 777 W. Hollis St., Nashua, NH. A burial will take place in the Spring. In Lieu of flowers, please make a donation to a charity of your choice.
VER MÁS VER MENOS