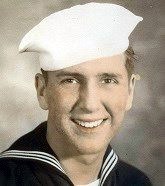 Merton Edward Smith, 90, of Milford, passed away on September 13, 2016. He was born in Milford, NH on November 14, 1925, son of the late Harold and Blanche (Wright) Smith. He attended Milford Schools and he was a veteran of WWII, serving in the US Navy for four years in the Mediterranean Sea and the South Pacific, and was awarded the European African, American Theater, Asiatic Pacific, Good Conduct Medal and WWII Victory Medal. He was a member of Harley Sanford VFW Post 4368 and Benevolent Lodge #7 F+AM both of Milford, and a former member of the Nashua Barbershop Chorus. He was predeceased by his wife June L. Smith in 2000. He retired in 1988 after 32 years with Raytheon as a Tool and Die grinder. In his early years he enjoyed hunting, fishing, and photography while living in Milford for 50 years. Later while living in Jensen’s Mobile Home Park in Nashua he enjoyed gardening, bicycle riding, bowling, billiards, crossword puzzles, playing cribbage and scrabble with his friend Pauline Daniel and Molly McMahon, he was an avid Red Sox fan and also enjoyed Woodworking. He is survived by his son Norman Smith of Nashua, and daughter Barbara Riglin of Flagstaff, AZ, niece Sheila Winkler of Milford, and a grandson Jeremy Smith of Saco, ME. Visitation will be held on Monday, September 19, 2016 from 10:00AM-11:00AM at the Zis-Sweeney Funeral Home 26 Kinsley St. Nashua. Burial will follow at Riverside Cemetery, Milford
VER MÁS VER MENOS