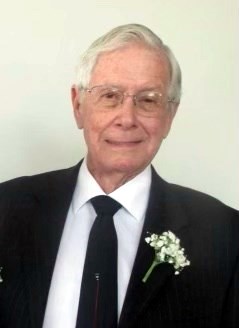 Kenneth Lee Pollard went to meet his Lord and Savior on January 17, 2022. He was born on March 5, 1935 in Hialeah, Florida where he spent his childhood years and much of his adult life. After graduating from Miami Edison High School in 1952, Ken began a career in aircraft maintenance. More importantly, a year after graduation at Miami Roller Skating, he met his life long love…Beverly Womacks. After a two-year courtship, Ken and Beverly were married on June 16, 1955. They settled into family life in the Hialeah area that lasted over 30 years. Ken and Beverly were blessed with three children (Cyndi, Nadine and Billy) and enjoyed many years of beach excursions and family activities. Family and family lineage were near and dear to Ken. A job opportunity brought Ken and Beverly to San Antonio in 1991, eventually moving to Schertz where they lived for 16 years. Ken and Beverly moved to New Braunfels in 2013 as early residents of The Pinnacle. Ken loved woodworking and sometimes sold his creations at craft shows. His later years at The Pinnacle were especially meaningful to him as he kept up his woodworking hobby and developed wonderful relationships, mostly around the jigsaw puzzle table and in the wood shop. Ken’s career in aircraft maintenance lasted 38 years with Eastern Airlines and 10 years with Dee Howard in San Antonio. Ken’s career advanced from mechanic into supervisory roles. He was selected for special training on the Airbus in Toulouse, France in 1977. He was recognized as Supervisor of the Year in 1980. Ken’s work ethic and dedication to his craft was extraordinary. Ken was a man of few words but loved to tell stories. He had the patience of a saint. He was a model husband and father through his faith in God and love for his family. Ken is preceded in death by his son, Billy and sister Mary. He is survived by Beverly, his wife for 66 years, and his sister Frances. He is also survived by his daughters Cyndi Hooper (Mark) and Nadine Schmeltekopf (James), 6 grandchildren and 5 great grandchildren, and numerous nieces and nephews. A memorial service will be held at Oakwood Church on January 27th at 10:00 AM. He will be interred in Hialeah, Florida at a later date. In lieu of flowers, donations may be made to Oakwood Church Kids Club or Pinnacle at Eden Hill Communities. Fond memories and expressions of sympathy may be shared at www.ZoellerFuneralHm.com for the Pollard family.
VER MÁS VER MENOS