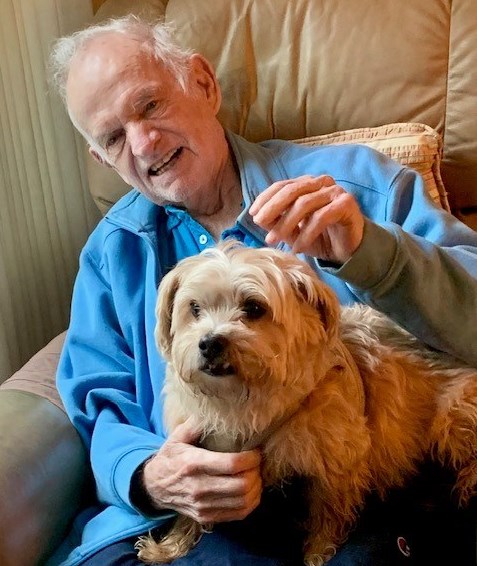 James E. Lane October 15, 1927 - September 29, 2022 James E. Lane, (“Jim”) age 94, passed away on September 29, 2022 at The Cottages of Perry Hall in Parkville, MD after battling Parkinson’s Disease for more than 16 years. The beloved husband of Lillian Rita (Klima) Lane, whom he married in 1953, Jim was born on October 15,1927 in Rocky Mount, NC to Jesse Edwin and Fannie Emma (Goff) Lane. Orphaned at 14 in 1942, Jim attended Boarding School in Asheville, NC. He and his brother Rudolf were able to finish their education in part due to a small bequest left to them by their mother. His father, Jesse E. Lane died in 1933. Upon graduating in 1945, Jim joined the Merchant Marines. He subsequently enlisted in the US Army as a communication engineer to serve in the Korean War. James was honorably discharged from the US Army from the US Ready Reserves with the rank of sergeant in 1956, having been awarded the Combat Infantry Badge, Korean Service Medal W/2BSS, and UN Service Medal. In 1953, Jim began working at Bethlehem Steel at the Sparrows Point Plant, ultimately retiring after 38 years (1991) as a master millwright in the Steam Department. During his career at Bethlehem Steel, Jim and Lillian raised three sons and resided in several communities in the Baltimore area (Jones Creek, Dundalk and Bel Air). Upon Jim’s retirement, they moved to The Villages of Lady Lake, FL, where Jim could pursue his love of sports and Lillian her crafts. Jim was an avid and accomplished golfer and die-hard Ravens fan. They returned to Bel Air, Maryland in 2008 to be closer to their family soon after his diagnosis of Parkinson’s Disease. Jim was many things over his long lifetime. Chief among them was devoted husband to Lillian, a proud loving father to three sons and a good and generous friend. Jim loved to share good times and his warm sense of humor with the people he loved. Family was the most important thing to Jim. He has made many loving memories for everyone he leaves behind. Jim is survived by his wife Lillian and their sons Steven E, Morristown NJ; Mark A, Baltimore MD; Gary V. and his wife Angela, Phoenix MD; two granddaughters Mandy Paino and her husband David; Hallie Aroz and her husband Jason; a great granddaughter, Alexa Paino. In addition to his parents, Jim was also predeceased by his brother, Rudolf C. Lane; siblings from his father’s first marriage to Maggie Little Lane, Robert Julius Lane, Jr., Jessie Mae Gay, Ruby Elizabeth Todd, twin brothers James Herbert Lane and John Herman Lane and a sibling from his father’s second marriage to Margaret Bellflower Lane, William Edwin Lane who died in infancy. After the death of Jim’s mother, his brother Herbert and his wife Theresa (Aka “Trick”) became surrogate parents to him. Relatives and friends are invited to gather at the Schimunek Funeral Home, Inc., 9705 Belair Rd, Nottingham MD 21236, on Tuesday, October 4, from 11:00 AM to 12:00 PM; with the Funeral to begin at 12:00 PM. Interment at will follow at Sacred Heart of Jesus Cemetery in Dundalk MD.
VER MÁS VER MENOS