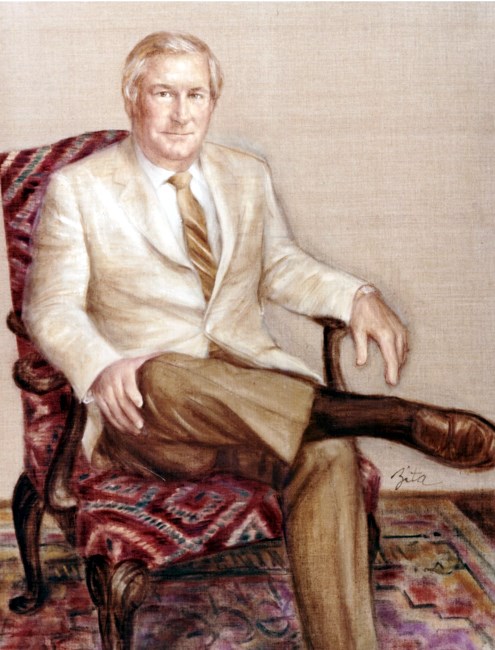 Jack Hodges lived large and loved large. He had a huge heart, loved the art of the game and loved a challenge.

He was generous with his family and happy to share his good fortune whether donating to philanthropic causes such as Myriad Botanical Gardens or OCU, political campaigns (purchasing the carpet for the Oval Office when Ronald Reagan was elected President), buying children toys at Sears on Christmas Eve, loaning his jet to friends in need or providing Thanksgiving dinner to the underserved. He taught his children by example to do the same – each child was responsible for buying Christmas for a family including new clothes, toys, Christmas dinner as well as a Christmas tree and all the trimmings. Beginning in 1983 his house was well-known for its Christmas decorations much to the delight of all who drove by.

There was nothing Jack couldn’t do and he loved a challenge, whether it was pitching pennies, playing cards, flipping coins, making food, playing golf or hauling a load. He made many BBQ meals on his cooker and he loved cooking for lots of people. In its heyday he loved gambling in Las Vegas, trips to Grand Lake and trips to Acapulco which continued throughout his life.

He often played in the Bob Hope Golf Tournament winning twice. He said he could beat the hell out of a ball but he wasn’t a good putter. When asked for his autograph, he said you don’t want my autograph I am just a truckdriver. He and Judy entertained Bob Hope in their home on several occasions as well as Telly Savalas, Bob Barker, Cary Grant and Charley Pride.

Jack, 85, died unexpectedly Saturday at home after working last week with his three grandsons at the trucking company they founded six years ago. He was born on July 19, 1932 and by the time he was 10 Jack had his first job selling peanuts at the Oklahoma City Zoo. By the time he was 14 he was working with Mrs. Eckroat at Eckroat Feed & Seed raising chickens.

Hodges Trucking Company was founded in 1932 in Oklahoma City by Bill W. Hodges who sold it to his sons Clarence, J.D. and Jack in 1964 on the condition Jack serve as president. After starting with four trucks, by 1964 it had grown to a fleet of 19 trucks including mobile cranes. By 1971 Jack was the sole owner of the oilfield and heavy haul transportation company which carried oilfield equipment and oversized machinery through its fleet of trucks, forklifts, trailers, and multi-axle lowboys. The company also provided lifting services for heavy equipment, such as bridges, compressors, drilling rig equipment, generators, storage tanks, transformers, vessels, wrecked trains, and computer products through its fleet of cranes. It served various industries and companies in the United States.

There were many occasions when the company was called on to put an airplane back on the runway in an ice storm, pull a truck out of the water after falling off a bridge or take apart missile silos for the government in Salina, Kansas.

During his tenure the company initiated an employee retirement plan and profit-sharing plan; added 20,000 square feet of maintenance and shop facilities and the ability to totally reconstruct a vehicle; acquired J.D. Hodges Trucking Company doubling the size of the company with assets worth $10 million and built 30 special trucks for Parker Drilling Company to send to Algeria. Between 1978 and 1985 Core Oil & Gas Corporation was incorporated and had a rig fleet of 13 and total revenue for the trucking company and drilling company of $131 million. Chesapeake purchased the business in 2006.

He was preceded in death by Judy, his wife of 53 years; his parents W.W. and Euel Hodges; his brothers Lloyd Hodges and Clarence Hodges.

A Celebration of Life will be at 1 p.m. Wednesday at Crossings Community Church, 14600 N Portland, Oklahoma City; and there will be a viewing from 6 to 8 p.m. Tuesday, August 15th, at Hahn-Cook/Street & Draper.