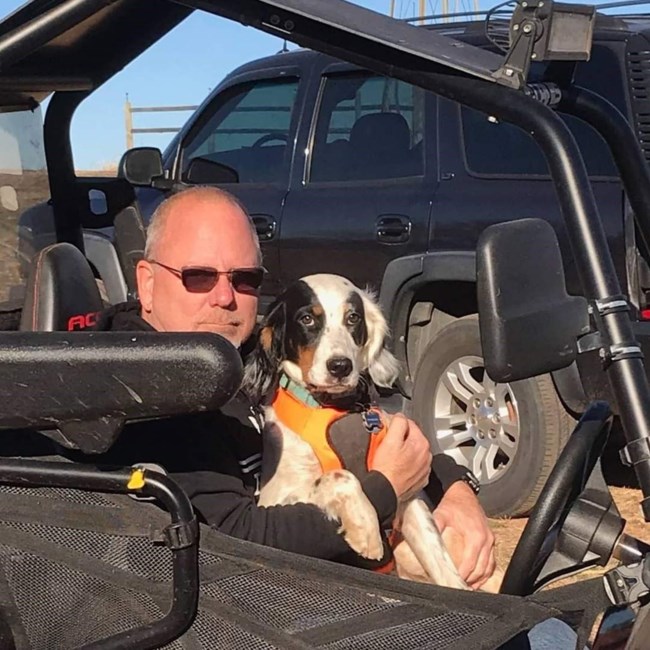 Russell “Russ” Cole Hennigh returned to his heavenly home September 18, 2022, reuniting with beloved family who have gone before him. He was born June 6, 1963 in Woodward, Oklahoma to Mikel Cole and Sibyl Jean (Weibert) Hennigh. After completing his education in Oklahoma, he moved to Bismark, North Dakota for a few years, after which he relocated to Fort Worth, Texas, where he worked for American Airlines. After retiring from the company in 2017 he would return to Oklahoma, living next to his sister Sherri and her husband Jim. Some of his achievements include: In April 2007 he completed his training with the Euless Fire Department Citizen’s Fire Academy Class #12, as well as Certification of Graduation from the Euless Police Department Class #18. Russ was an adventurous spirit, always going on trips with Micah, his dog. With some classic rock on the radio, Russ would head out on trips to hunt, scuba dive, and much more. For him, a perfect day would be to round up his brother-in-law Jim and Micah before heading up to the cabin for another hunting trip. He will always be remembered as the responsible, reliable, kind-hearted brother who was loyal to his friends and family. He leaves behind so many good memories and a big hole in so many hearts. He is preceded in death by his father, mother, brother-in-law Jim Mighton, and great-niece Alyssa Mighton. He is survived by his sisters Sherri Mighton of Yukon, Oklahoma and Niki Kuklenski, husband Nick Kuklenski, of Fort Worth, Texas; and his best friend and furbaby, Micah. A memorial service in honor of Russ’s life will be held Monday September 26, 2022 at 10:00 a.m. at Chapel Hill Funeral Home, 8701 N.W. Expressway, Oklahoma City, Oklahoma 73162. Fond memories and expressions of sympathy may be shared at www.chapelhill-okc.com for the Hennigh family.
VER MÁS VER MENOS