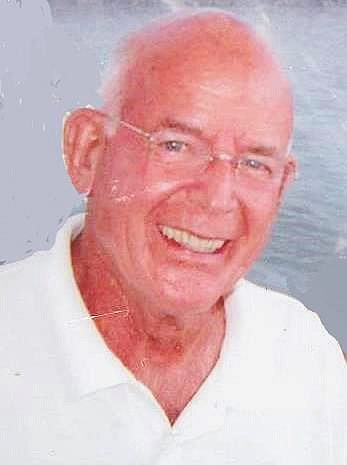 Raymond (Ray) J. Newman of Harwich, MA, loving husband of Carole A. (Davis) Newman, died July 23, 2017. Born in Bridgeport, CT on December 27, 1929, son of the late William M. and Ruth (Cowie) Newman and identical twin of the late John R. Newman. He is survived by brothers William M. Newman of Sandy Hook, CT and Peter E. Newman of Warner, NH, daughters from a prior marriage, Deborah Flynn and Kathleen Taliaferro both of Colorado, his grandson, Greg Flynn of California and many nieces and nephews. Ray graduated from Stratford High School and the University of Connecticut in 1960. He served in the U.S. Army 1st Airborne Division following WWII. He was employed in the insurance industry as a director of data processing, retiring from Cigna Insurance. A talented athlete, he swam competitively, played baseball and basketball and was an accomplished sailor. Most weekends, he sailed the waters of Long Island Sound with Carole or his brothers on his beloved boat, Brendan. An avid golfer, he was a member of the Connecticut Valley Golf Course since 2002. A devout Catholic, Ray was a communicant of Saint Elizabeth Seton in Rocky Hill, CT where he taught CCD. He was a member of the Sunrise Men’s Prayer Group in Madison, CT. While living on the Cape, he was a member of St. Joan of Arc Parish in Orleans. Ray was a member of the Chatham-Nauset Lions Club and the Newcomers’ Men’s Cooking Club. He loved Cape Cod and the many wonderful friends he and Carole made while living there. Calling hours are 4-6 PM Friday, July 28 at Nickerson Funeral Home, 77 Eldredge Park Way, Orleans. A Mass of Christian Burial will be held at 10 AM Saturday from St. Joan of Arc Church, Orleans. Burial to follow in the Island Pond Cemetery, Harwich. Donations can be made to the Zulu Missions, P.O. Box 2164, Durban 4000, South Africa. For online condolences please visit www.nickersonfunerals.com
VER MÁS VER MENOS