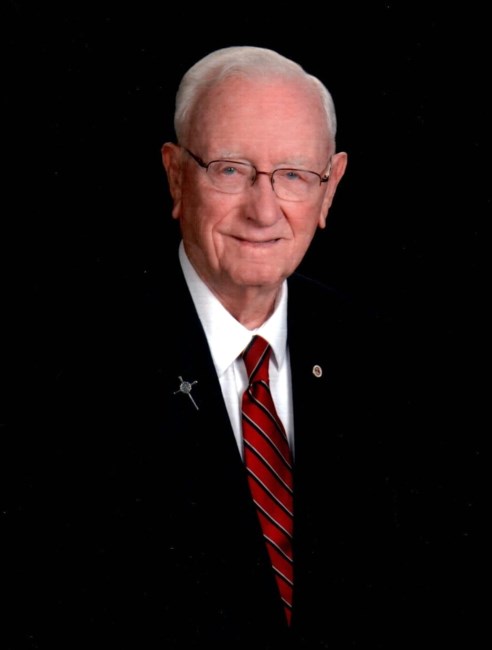 Edward Joseph Russek, Jr., age 100, born January 28, 1922 in Schulenburg, TX, died Tuesday July 26, 2022 in Hutto, TX. E.J. (Ed) was a devoted husband, father, grandfather, great-grandfather, and great-great-grandfather. A World War II veteran, he served as a Weather Observer Teletype Technician in the US Army Air Corp/Air Force 1942-1946. He was preceded in death by his sweetheart, Geraldine (Jerry) Osterhaus Russek. He is survived by 5 children: Robert (Cathy) Russek, Mark (Dee) Russek, Anne Byers, Mary Janet Lloyd, Frances Russek, 7 grandchildren, 12 great-grandchildren, and 1 great-great-grandchild. He was also preceded in death by his parents Edward J. Russek, Sr. and Emelia Schindler Russek, and 8 siblings. The family will receive guests at the Walden Room of Cook-Walden/Capital Parks Funeral Home beginning at 5:00 p.m. with Recitation of the Holy Rosary to begin at 7:00 p.m., Tuesday, August 2, 2022. The Funeral Mass will be celebrated at 10:00 a.m., Wednesday, August 3, 2022 at St. John Vianney Catholic Church, 3201 Sunrise Rd., Round Rock, TX 78665. Interment with military honors will follow at Cook-Walden/Capital Parks Cemetery. There will be a reception at Cook-Walden/Capital Parks Funeral Home following interment. In lieu of flowers, donations may be made to: St. Jude Children’s Research Hospital, stjude.org, and Sisters of the Incarnate Word and Blessed Sacrament, iwbscc.org. E.J., Ed, Daddy, or Opa ~ however you knew him, I’m sure you’re glad you did! The sixth of nine children E.J. was born on and grew up on a farm near Schulenburg, TX. “We all helped with the farm work including milking cows, picking cotton, harvesting corn, and anything else that needed to be done.” He walked 5 miles to school in Schulenburg until he was able to drive the family’s Model T. E.J. played bass fiddle in the high school orchestra. He also followed in his father’s footsteps and joined the Schulenburg Liederkranz, men’s German choral group. He continued to sing, harmonizing with his parents, brothers, and sisters, and in church choirs throughout his life. He served his country in the US Army Air Corp/Air Force 1942-1946 beginning at Ellington Air Field in Houston, then Chanute Field in Illinois, Atterbury Army Air Base in Indiana, Seymour Johnson Field Goldsboro, NC and in North Africa. Returning home with an Honorable Discharge from duty, E.J. met and fell in love with Geraldine (Jerry) Osterhaus. When sharing the story of their engagement, he said, “Everybody already knew that I wanted to marry her.” At their wedding, he wore a suit borrowed from his brother, and he borrowed his new brother-in-law T.J.'s car for their honeymoon. He said, “We were head-over-heels in love.” They enjoyed 62 years of a blessed and wonderful marriage. E.J. and Jerry had 5 children and he loved being involved in their activities. He was Scout Master for Troop 162 in Corpus Christi while his sons, Bob and Mark, were active in scouting. His influence in all of the scouts' lives came full circle when one of his scouts was later his pastor at St. Patrick Catholic Church in Corpus Christi - Msgr. Roger Smith. E.J. supported his 3 daughters, Anne, Marynet, and Frances, as the president of the IWA H.S. Booster Club. A Knight of Columbus for 70 years, E.J. served as a Grand Knight in Kingsville, TX, was editor for many years of the newsletter for Council 1202 in Corpus Christi, and made friends playing dominoes until he was 98 with Knights in Council 12148 Round Rock at St. John Vianney Catholic Church. E.J. worked as a computer operator at Celanese Chemical Company and retired after 32 years. After retiring, he and Jerry volunteered and led the Social Ministry Food Pantry at St. Patrick Catholic Church in Corpus Christi. St Patrick’s was their church home for 52 years. He and Jerry were also among the first lay-members of the Incarnate Word Associates for Bible study, prayer, friendship, and support of the Sisters of the Incarnate Word and Blessed Sacrament in Corpus Christi. There is so much more to tell of his 100 years of befriending, caring for, enjoying, and blessing family, friends, and community. Perhaps his legacy is stated in this message shared by a niece on his 100th Birthday and repeated in various ways in many cards and comments: “Knowing you, I would guess the secret to long life is the love of people and God, a good sense of humor, kindness, keeping active, and a loving, positive attitude.” Fond memories and expressions of sympathy may be shared at www.cookwaldencapitalparks.com for the Russek family.
VER MÁS VER MENOS