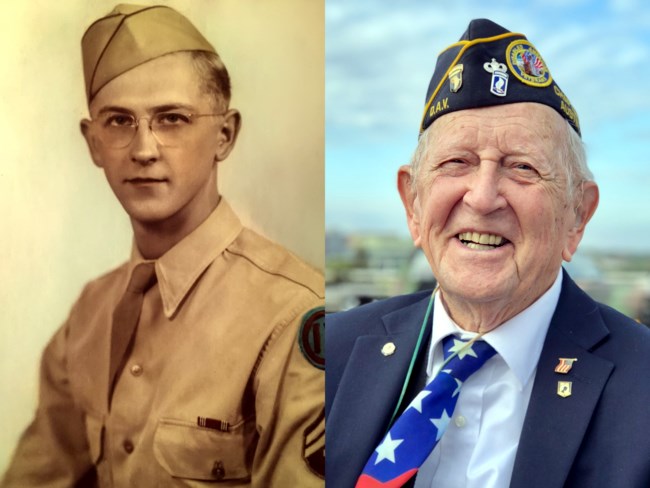 America has lost another member of The Greatest Generation. After 98 years of dedicated service to family, faith and his country, James C. (Jim or J.C.) Ernst passed peacefully into the waiting arms of Mother Mary and Jesus Christ on Jan. 20, 2021. He was preceded in death by 411,534 Americans that have died as victims of the Covid 19 Pandemic. James was born in Elkhart, Indiana, the son of Harvey C. and Verna A. (Hoetger) Ernst. He enjoyed a dedicated and full life joining the US Army in 1942 during the height of WWII. He was a proud member of the 101st Airborne “Screaming Eagles “, earning his Master Jump Wings and participated in support of the D-Day invasion by parachuting into LaHavre, France in October 1945. He served in combat infantry units in LaHavre, Rheinland, and the Ardennes in Belgium at the Battle of Bulge, where he earned the first of his three Bronze Stars. He promptly re-enlisted after WWII serving again during the Korean War, and then later two tours of duty in Vietnam, where he earned the Combat Silver Star in 1968. After serving in Vietnam, Sergeant First Class James Ernst deployed back to Ft. Hood, TX with the 1st Armored Division where he retired from active military service. He moved his family to Austin where he became the “kindly letter carrier” for the next 20 years with the US Postal Service. Through the years in Austin he devoted himself to the Disabled Veterans as a member of DAV Lone Star Chapter 4, Austin, serving many years as past Commander, Vice Commander and Chaplain. He served his faith as a current and longtime member of St. Mary Cathedral Austin parish, where along with his wife Jean, was active in the Holy Rosary and Holy Name Societies and the Cathedral restoration Committee. His hobby as an avid model train enthusiast captured his love of the American railroad as the son of a New York Central train engineer. His sister Margaret recalls that his then girlfriend and his future wife, Jean, “was the one”, as she was the only girl he ever allowed to run the controls of his model trains. His veteran recognition continued when, at the age of 90, he made a memorable trip to the WWII memorial in Washington, DC as an honoree of Honor Flight Austin. He was being escorted in his wheelchair by a Lt. Colonel, and smiling as he remarked that the “Colonels are still pushing the Sergeants around”. On June 6, 2019, the 75th anniversary of D-Day, he was honored on the deck of USS Battleship Texas where the French Consul General presented him a medal as the “Knight in the French Order of the Legion of Honor”. This highest award of the French Government was presented for his action in combat battles for the liberation of France during the D-Day invasion of Europe campaign. His family never called him “Chevalier”; he was just “Pops.” He will be missed by all who knew him, but never forgotten for his smile, and the extreme kindness he showed to everyone. His sense of duty, his love of country and the flag, and his enduring faith in God and family never wavered. He was preceded in death by his loving wife of 54 years, Jean Elizabeth (Seegers), his parents, three sisters and two brothers. He is survived by his five children, Marie Sheeder of Ft.Dodge IA., sons, Jim Ernst and wife Jeri of Cedar Park, Tx, Ben Ernst and wife Tanama of Lewisville TX, and Dan Ernst and wife Cleta of Austin, and daughter Barbara Jean Ernst and life partner Barbara Lee Supeno of Addison Vt. And Grandchildren, Jason, Levi, Katie, Fairann, Sara, Benie, Erik, Joe, Jacob, Kelly and Chris, plus 14 great-grandchildren. He is survived by his sister, Margaret Hruby of Elkhart, IN. The family requests in lieu of flowers, memorial donations can be offered to St. Mary Cathedral Austin Restoration Fund or to The Honor Flight Austin. “It is foolish and wrong to mourn the men who died. Rather, we should thank God that such men have lived.” - Gen. George S. Patton, Jr. Due to the Covid Pandemic, a private family graveside with military honors is planned. To view livestreaming of the service, join from this link: https://player.vimeo.com/video/503675931 shortly before 1:00 p.m., Tuesday, January 26, 2021.
VER MÁS VER MENOS