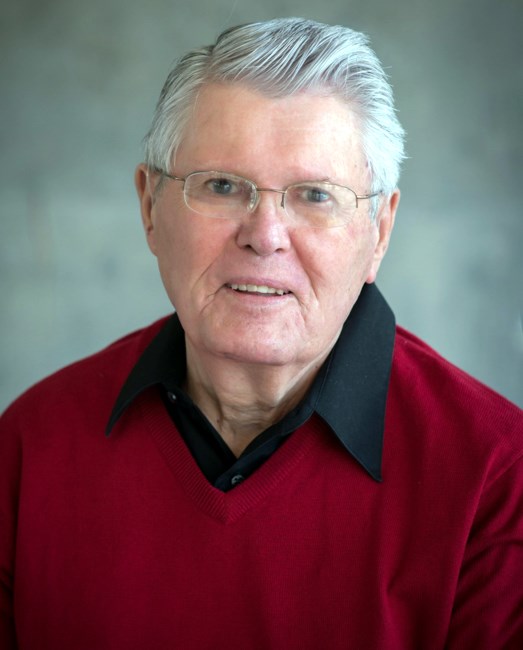 James William “Bill” Tolson, of Round Rock, Texas, died peacefully at home and surrounded by family on August 13, 2020 at the age of 92. He was born October 1, 1927 in the community of Point Enterprise, near Mexia, Texas, to Felix and Ina Tolson. He is survived by his wife of 65 years, Doxie Tolson; his daughters, Debbie Rippstein, Robin Hunt (David) and Sherri Seago; his grandchildren, Allison Notgrass (Blake), Brandon Nagle (Jenny), Ryan Nagle, Amanda Keeter (Matt), Dave Hunt (Olivia), Phillip Seago, Alexandra Seago Ashley (Stephen), Harlan Seago, Charlotte Seago and Rebecca Seago; his great-grandchildren, Abbie and Morgan Notgrass, Theia Nagle, Sadie and Harper Hunt and Wesley and Carson Keeter; his two first cousins, Helen Herring of Mexia and Peggy Bain of Waco, as well as, numerous nieces and nephews. He was preceded in death by his parents and brothers Roger, Byron and Marvin Tolson. After graduation from high school, Bill joined the Merchant Marines followed by service in the United States Army. He travelled extensively around the world during this time. Afterwards, Bill continued his 40-year career with J.C. Penney. While living in New Braunfels, he was ordained as a deacon at First Baptist Church. Following retirement, Bill and Doxie relocated to Round Rock and have been active members at Central Baptist Church and enjoyed serving there as a teller and usher for many years. We are joyful and at peace in the secure knowledge that he is with Jesus. A funeral service will be held at the Hankamer-Fleming Chapel located on the campus of Texas Baptist Children’s Home in Round Rock, on Tuesday, August 18, 2020 at 10:00 a.m. to be followed by a graveside service at Cook-Walden/Capital Parks Cemetery in Pflugerville. Viewing offered prior to the service beginning. In lieu of flowers, the family would appreciate any acknowledgements in Bill’s memory be made to Central Baptist Church or Texas Baptist Children’s Home. The family want to express their appreciation to their many friends, their Sunday School class and all of the wonderful staff of Encompass Hospice who so lovingly cared for him this past year.
VER MÁS VER MENOS